Whenever I talk about the need for an offshore bank account, I get asked one question over and over: “What about deposit insurance”?

It’s true: some countries have less in the way of deposit insurance than the good ol’ USA. But when you focus on things like that, you’re missing the point of offshore banking.

Now, I’m not telling you to do something you’re not comfortable with. We all have to be responsible for our financial decisions in life, and if you can’t sleep at night worrying your money is going to be sucked down a black hole by a failing overseas bank, then you don’t have freedom.

Let’s do a little math and get to the heart of the issue.

In the United States, the FDIC has about $30 billion in reserves. This is the money it uses to pay depositors of failed institutions if it can’t pawn the failed bank off on another bank.

Now, compare that to $9 trillion – with a “T” – in customer deposits. The largest four banks alone control nearly half of that money, with the numbers among smaller banks quickly declining from there. Approximately thirty-nine banks have deposits exceeding the FDIC’s current purse. In the event of a catastrophe, the FDIC couldn’t bail them out if they wanted to. 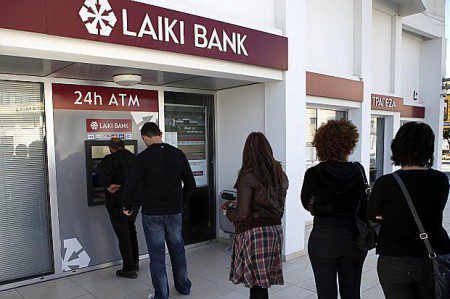 Bank customers line up to save their money in Cyprus, despite 100,000 euros of deposit insurance

The FDIC is literally chopping pennies into little pieces, with one of the remnants serving as the amount of money they’ve got lying around if it all comes crashing down.

Of course, Bennie and the Inkjets might summoned to print more cash to hand out to clueless depositors, but eventually that cash will be worthless.

I don’t trust the government to do much of anything right. While it might feel nice to have a “safety blanket” of deposit insurance, we’ve seen in Cyprus and elsewhere how the bureaucracy will feel free to burn that blanket whenever it suits them.

They’ve shown that they’re nothing more than sociopaths who only want you to “feel” secure – or have your money – if they’re in power. Otherwise, all bets are off.

Plenty of countries around the world offer deposit insurance, some under more restrictive conditions. Singapore, not one to promote moral hazard, insures S$50,000 (about US$40,000), but only deposits held in Singapore dollars. Foreign currency deposits aren’t covered at all. Fortunately, the Singapore dollar is one of the strongest currencies these days.

Hong Kong covers up to HK$500,000 (about US$64,500) in customer deposits with much more liberal rules. Their system insures deposits held in other foreign currencies, a nice feature that allows you to hold higher yield currencies like the New Zealand dollar instead of US dollars spitting out a few basis points a year.

Other developed countries offer their own insurance, too. The US, never an opponent of moral hazard or the potential for runaway spending, has perhaps the most liberal insurance policy if you believe in the government backing it.

But that’s exactly the point.

If you don’t like the fundamentals of a country you’re considering opening an offshore bank account in, the country’s deposit insurance scheme shouldn’t be what sways you. Offshore banking is all about escaping the sovereign risk of inherently flawed systems that bureaucrats keep patching up and calling solvent. Eventually, something’s going to blow.

Putting some money offshore doesn’t mean necessarily demand you use some exotic jurisdiction. Yet you can often get paid for taking that risk. Banks in countries like Russia, Mongolia, Vietnam, and others pay handsome interest rates compared with any western country – even Australia or New Zealand. Places like Russia do have insurance – about $32,000 worth – as do other countries.

The bigger risk going offshore is currency risk. Banks in Ukraine, for example, were paying 18-20% APYs, largely on the widely-held that the country would adjust its dollar peg and devalue the currency by half that rate. Other countries like Mongolia suffer high inflation, yet banks just need the money to lend to local businesses at usurious rates due to high demand.

There are certainly a few stable currencies to go with, and in most cases you can still hold US dollars if that’s what you want. Meanwhile, going with a multi-national bank may make you sleep better at night, as long as you know that each country’s affiliate is still its own entity. Would a worldwide mega-bank let their Vietnam subsidiary go belly-up on its own? I’ll let you make up your own mind.

There are plenty of ways to minimize your banking risk when opening an offshore account. The first step, however, is realizing that your bank at home isn’t really risk-free to begin with.