Generally, the dollars, Euros, Pounds, or shekels in your bank account lose 2% of their value every year due to inflation. This makes the cash you hold worth even less each year. As most currencies don’t follow a gold standard anymore, the system balances on people’s trust in the system and on governments making good policies to keep their currency strong.

After a very chaotic 2020, that trust may be in trouble. Many people believe inflation could become much worse due to crazy money printing policies around the world, but especially in the US. We’re talking about printing digital money out of thin air to the tune of over $2 trillion.

I’m a believer in having some cash. It gives you the flexibility to buy what you want and expand your business. However, as with many things and especially considering the current economic environment, you’ll want to diversify. You don’t want to have all your eggs in one basket by having all or even a majority of your net worth in cash.

I know it can be a struggle to know how to diversify. In this article, I want to share with you four alternative options to keeping your money in cash.

As an aside before we get started, I’d like to offer some advice about diversifying and having alternatives around the world. I’ve been talking for a long time about things like second residencies and second passports. These things themselves have a residual value, particularly if you live in a high-tax country with increasing regulation.

I understand they aren’t stores of value by themselves. However, in addition to just storing and safeguarding your money in different banks and the different types of stores of value, if you are a 7- to 9-figure entrepreneur or high-net-worth individual, consider if you’ve safeguarded your citizenship. That’s where I would start.

Cryptocurrency as a Store of Value

The first store of value that has been on the news a lot lately is cryptocurrency. The markets for Bitcoin, Ethereum, and other cryptocurrencies are at all-time highs. Many people are expecting that with so much institutional money coming in, interest in these crypto markets will only increase.

Over the past 10 years, Bitcoin’s performance against inflation is not even a close race. Returns have been around 200% for over a decade (even gold is only around 18%). Some of the first bitcoins that I got back in late 2013 were only about $800. Consider what almost a decade at 200% has done for their value.

In the context of stores of value, Bitcoin and other cryptocurrencies can be a type of hedge with huge profit potential. There are several countries aligning their policies to crypto-friendly growth.

Now, I’m still not putting my entire net worth into cryptocurrency. Some people, like Michael Saylor, have gone all-in and would disagree with me, which I respect. I help people all the time who started out with $50,000 to their name and now they have $10 million — all thanks to crypto.

If you do go all in, I would recommend looking to diversify at some point, by divesting out of cryptocurrency into other stores of value. That will lock in some of that increase in value into other inflation-resistant assets. But certainly, cryptocurrency is a great store of value.

It will only develop and mature from here.

Precious Metals as a Store of Value

The second store of value, which is quite well known, is gold and silver. Some crypto investors think investing in precious metals is a relic while others seem to still love it. For me, I like the hedge of precious metals. I like storing them overseas in very private, very secure vaults.

It’s one of the things that if you’re a US citizen, storage of gold in your name outside the banking system is legally not a reportable asset. We’re not talking about hiding anything, but legally, it can be an affordable asset that you do not have to report to the government.

In addition to that benefit, gold has shown over thousands of years to be an inflation-resistant option. Whereas Bitcoin is a new option, gold has a long track record.

It can serve as an excellent way to invest using your otherwise stagnant retirement account. The global economy could easily end up in deep water and holding some gold in a “Gold IRA” protects part of your retirement account from the madness.

As for silver, I like the fact that, compared to the historical averages, it’s currently underpriced, even though some of the spreads are higher in silver. I like having both gold and silver — again, diversification.

Some of my criteria for finding a good offshore location to store your gold are a country that:

My top picks for the best countries to store gold are Singapore, New Zealand, and Austria.

Many of the high-net-worth people we work with — 9-figure individuals — have respect for precious metals, even if it’s just 2% or 3% of what they own in gold or silver. I like to copy that. General numbers are to store anywhere from 2-20% of your wealth in precious metals. I’m not going to put everything in gold, but it’s a tried and proven, inflation-resistant store of value.

The third store of value that I think is really important and not talked about enough is investing in farmland. I first heard about how to invest in agriculture from Jim Rogers. Years ago, he claimed that farmers are going to be the ones driving Lamborghini’s in the future. If you look at the trends around the world, agricultural farmland is probably the most undervalued store of value.

Land, in general, is becoming an increasingly scarce resource. When I was in grade school the world’s population was six billion. Now we’re pretty close to 8 billion and that’s only going to increase exponentially over time. We’ll continue to see less and less available land.

For emerging countries, the jobs that people in the western world bemoan have been taken to places like Malaysia, Vietnam, and China have led to an increase in the size of their middle class. Latin America has an increasing middle class as well. These people are eating more and more meat. Rearing livestock requires more space, making land more scarce.

Beyond meat, one hopeful aspect of farming is that we’re seeing more of farming moving indoors and becoming successful by utilizing vertical stacking methods. There is more and more agricultural innovation, especially in the West. 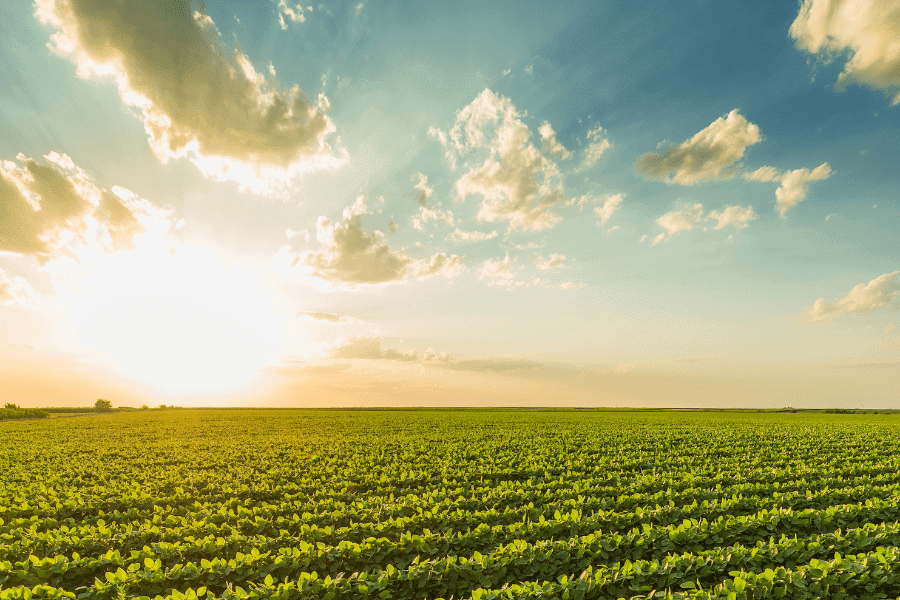 While farmers in the West have begun using agricultural stacking methods and other farming technologies, much of the world is still using older techniques and is primed for growth.

There is still a lot of room for improvement in other regions though. Several years ago, I took a friend of mine, who hadn’t traveled out of the US much, to Macau.  We were staying at the MGM hotel. As he stood looking out onto the road and watched the workers there literally clipping all the hedges in the streets with hand clippers. He was confused why they weren’t given weed whackers or something with electricity.

This also applies to land in emerging countries in general. Look to buy land in cities that are expanding very rapidly. Perhaps not in Asia where it’s harder to buy and own land, but in developing parts of Europe or Latin America you’ll find land that is buildable, areas to where people are moving and there’s high demand. I have articles with questions to consider when buying land overseas and cheap real estate options that may be helpful.

I have bought land in numerous countries around the world on that basis. Just recently, I’ve been offered many times what I paid for one such property, partially due to the pattern of migrating suburbia that I’ve followed, of which my land is now a part.

With land, you’ll at least keep pace with inflation while having an asset that is a safer part of your portfolio. It’s harder for a government to go and take land. Digits in a bank account are one thing, but land is harder. Land, especially agricultural land, is a great store of value for your money.

The fourth store of value is a bit more open-ended: uncorrelated foreign investments. Oftentimes, people only look for stores of value within the area they live. If you live in the western world in particular, you’re probably not thinking outside of that western world bubble.

I see so many people who say they can’t live outside of the US. Things may be going terribly, but that’s where they feel comfortable. Maybe they’ve considered the UK, Canada, and Australia as other options because that’s what they know, but that’s it.

They’re not familiar with the places and options that we talk about here at Nomad Capitalist which offer even greater benefits. They don’t realize that there are countries that have lower taxes, increasing freedoms, and that are moving in the right direction.

Again, a benefit of looking for foreign investments if you are a US citizen is that foreign real estate that you own in your name is not reportable. Income and owning part of a corporate structure may be reportable so, of course, you’ll want to get good tax advice on that, whether working with Nomad Capitalist or someone else. But there are ways to use uncorrelated foreign investments to lower your taxes, even as a US person.

As for some places I like: I’ve talked about Cambodia recently as being one of the most investable frontier markets. Colombia, while not quite a frontier market, has some great options for investment and is headed in the right direction. Even Honduras has some great potential in some cities. I look at markets like Uzbekistan, Egypt, and even Turkey that are opening up and offer some great investment options as well.

The benefit is that these places are not going to be as correlated with the markets that you’re involved in, therefore, you’re getting an alternative store of value where the risk-return ratio is rather asymmetrical. You can get rental yields or certainly capital growth that is going to exceed what you could get in your own country and it will be a better store of value.

On top of that, you can get the benefit of diversification into other currencies, other regions, and taking advantage of places that are growing faster than your country. It’s really what we talk about here at Nomad Capitalist. Pure diversification into assets on an asymmetrical basis is itself a great store of value.

Start Diversifying Your Stores of Value

These are the four stores of value that I think any portfolio should consider. There’s not one golden ticket. My perspective, as a pragmatic entrepreneur, is to get involved in all of them. I don’t go all-in on anything. I like to have a little bit of everything.

You’re better able to protect yourself and your assets by having several options.

The added benefit is that in buying land or real estate or by investing in foreign businesses or governments you might get a residence or citizenship out of it. Especially for Westerners, this residual benefit will provide big value going forward that you never thought you needed 10 years ago.

As governments increasingly tighten the noose, planning through diversification can get you residence and citizenship, all while increasing your privacy and asset protection.