Nomad Guide to Living in Colombia

Multinational corporations and expats are making the transition to Colombia’s upscale living and bustling economy. Towering Andean peaks, mythical Amazon jungles, and pristine coastline all fuse into this economic and cultural hub.

Endless landscapes, activities, and opportunities unfold for expats arriving in Colombia. This country is built for any kind of lifestyle, whether you’re wanting to retire by the coast or startup in the metropolis.

Set aside the stereotypes because Colombia has turned a new page and is ready to leave its dark past in the past. Increased security has provided world-wide expats and visitors a safe country to explore, from its vast scenery to its sophisticated cities.

The Cost of Living in Colombia

Colombia offers an excellent, low-cost up-scale living ratio. In a country where one would expect otherwise, there exists an array of first-world amenities and infrastructure. Rent and cost of living will vary from place to place, but in general, you can expect the following to be true:

Dining out during lunch hours will cost you about $5 for the traditional Colombian lunch (soup, main, drink, and dessert). That can, of course, cost more depending on the areas where you dine. Dinner will cost about $10 – $20 a plate in a touristy area, however, the options are as vast as they are rich in variety.

There are many options for transportation in almost any part of Colombia. Bogota’s traffic is known to be stressful during rush hours, so it’s advisable to travel at other times if possible. City buses will cost you around $0.60-$0.90 one way, while taxis generally cost around $0.60 per kilometer in the cities.

Rent in cities like Medellín and Bogota runs around $400-$1,000 for an average apartment. Nicer flats designed for expats can be rented for around $1,500-$2,000 per month. Utilities are reasonable and should only cost you around an average of $60/month for gas and electricity.

Groceries costs vary depending on location, however, a couple can expect to pay around $375/month in food. A liter of milk in the grocery store will cost about 75 cents, one dozen eggs around $1.50, and a decent bottle of red table wine around $10.

The Best Places to Live in Colombia

Medellin was dubbed the ‘Worlds Most Innovative City’ back in 2012 by Citi and Wall Street Journal. A growing number of expats, tourists, and entrepreneurs are flocking to the city’s endless spring weather and cosmopolitan lifestyle.

A promising IT hub awaits, built on free after-school computer programming lessons and other government-funded programs. A strong educational culture with a blossoming arts scene provides a fresh and inventive workforce.

Santa Marta is perfect for those looking to retire or unwind from the daily grind. This paradise on earth is complete with tropical rainforest, snow-capped mountains, and a Caribbean coast. Tayrona National Park protects these pristine landscapes.

One of the oldest surviving cities in South America, Santa Marta has become a developed city many property buyers descend upon for its choice real estate. The largest urban city on the Caribbean coast in Colombia, Santa Marta’s economy is based mostly on trade, tourism, fishing, agriculture and port activities.

This tropical highland is capital to Colombia and home to over 13 million people in its metropolitan area. Home to many business headquarters, Bogota conveniently lies just five hours by plane from New York, Mexico City and Sao Paulo. In the north, there are chic and sophisticated neighborhoods in many areas of the city.

La Candelaria is the city’s cultural epicenter where the historic cobblestoned streets lead you through the numerous museums, restaurants, churches and convents.

Cali is the largest city in Colombia, after Bogota, with 3 million inhabitants. Founded in 1536, it contains a bustling industry of coffee, sugar, meats, cotton, tobacco, textiles, paper and more — all of which are traded and produced here.

The world capital of salsa, Cali pulses with its infectious salsa clubs and urban culture. This is Colombia’s only major city that gives access to the Pacific coast. It’s Colombia’s Southwest economic hub with one of the country’s fastest growing economies. 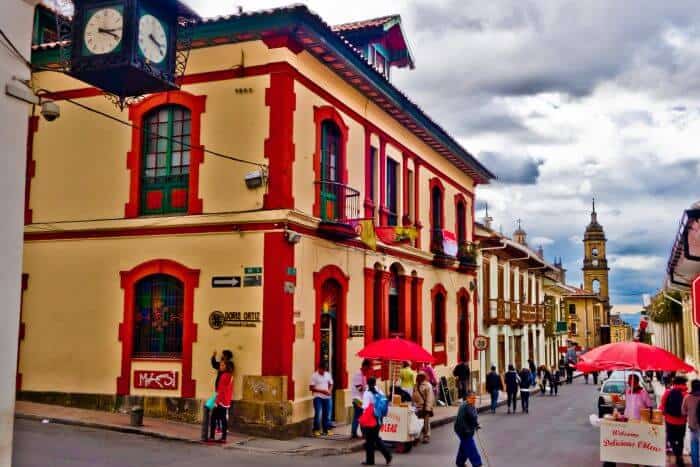 Colombia is an increasingly popular destination for both foreign investment and expat living.

Business and Start-ups in Colombia

Colombia is near the forefront in leaders of Latin America when it comes to entrepreneurship, abundant natural resources and a growing middle class. It’s true that things move at a slower pace here — and the country still relies heavily on oil, sugar and coffee exports to sustain its economy — but a surge in its tech industry over the last decade has brought in many international companies and investors.

The government has worked to create its technology center, a now $6.8 billion industry which grew 177% between 2007 and 2012. It’s now home to more than 1,800 software development and IT services. Google, Facebook, and Microsoft have all established offices in Bogota.

The Digital Talent initiative is producing a talented and educated workforce for start-up companies with thousands of Colombians receiving post-graduate degrees in engineering and computer science programs every year.

The Colombian government has been building the market over the years. In addition, it invested billions of dollars to expand its high-speed broadband access to a greater amount of Colombia.

In 2013, Mark Zuckerberg launched internet.org, “a Facebook-led initiative bringing together technology leaders, nonprofits and local communities to connect the two-thirds of the world that doesn’t have internet access.”

This initiative will allow smartphone and tablet users free access to the internet without data charges. It will provide businesses with a greater connection to a wider workforce. And locals will have access to more opportunities for employment and educational programs, particularly in the tech world.

Colombia is steadily developing its infrastructure to create a booming tech ecosystem. In fact, the whole Colombian economy is doing quite well. Despite the blow of low oil prices, Colombia is one of Latin America’s strongest and fastest-growing economies.

Despite the challenges, Colombia is staying steady in its long-term goals and a growing number of advantages in producing a worldwide competitive market.

With around 48 million people and 440,000 square miles, Colombia includes an Atlantic and Pacific coast, islands, rain forest, Andean peaks, and plains. It connects to Central America via Panama and borders Peru, Ecuador, Brazil and Venezuela.

The food in Colombia is as rich in variety as its different regions. Depending on where you are located, you can expect to enjoy classic dishes that include grilled meats, chorizo, beans, rice and fresh avocado and tomato. Many soups are served in a traditional manner which will typically include chicken and potatoes. In coastal areas, an array of seafood is abundant. Various fish and lobsters are severed up with coconut rice and sweet plantain patties.

Spain’s influence is still seen in many aspects of Colombian culture. For instance, Catholicism continues to be the main religion. Spanish is the primary language and offshore businessmen and expats enjoy the fact that Colombians do not have a strong accent. In fact, they speak clearer Spanish than many other parts of Latin America.

While Colombia’s architecture reflects its 17th-century Spanish colonial roots, the 19th century brought an entirely new style known as the republican — a movement that represented the independence of Colombian art. Art is ornate and innovative with a strong historic background. Jewelry, paintings, fabrics, and sculptures are long recognized traditions of Colombia, dating back to over a millennia ago.

The literary art scene is known world-wide with authors like Jorge Isaacs and Nobel Prize winner Gabriel Garcia Marquez, author of 100 Years of Solitude. The music scene throughout Colombia comes from a mix of influences including African, European (mostly from Spain), native indigenous and American.

Cumbia and salsa are danced in spicy clubs throughout the country while bigger cities offer up a modern taste of nightlife in various bars and discotecas.

Cities like Medellín are turning a new page with heightened security and city transformations, including newly built public libraries, schools, and parks city-wide. The homicide rate has decreased by almost 80% from 1991 to 2010. Innovative and sustainable transportation provides safer and quicker ways for people to commute throughout the city.

While its infamous dark past and crime rates have diminished over the last few decades, they’re not obsolete by any means. Cities like Bogota still struggle with theft and street muggings, which have increased since 2007.

However, the rural areas of Colombia are traditionally known to present a higher risk of gang and terrorist-related activity than Colombia’s major cities.

On a positive note, Forbes included Colombia in its list of “Coolest Places to Visit“. The country has noticed the increased publicity and has made security a greater priority in its major cities. Most expats say that the areas where they go in Colombia feel perfectly safe.

Real Estate and Housing in Colombia

Bogota, Medellin, Cali, Santa Marta and more are all cities equipped with a great infrastructure and a decent real estate market for investing. Recent government incentives to invest in real estate can land you citizenship in the country with little effort.

The Wall Street Journal named Cali as the most affordable city for real estate, both in Central and South America, on a per-square-meter basis. Medellin came in third place at $1,119 USD per square meter.

With the excellent business and real estate opportunities in Colombia, people are beginning to take notice as it shows in prices which have doubled from 2006.

Property in Colombia is still extremely affordable. Regardless, I would still suggest you seek out a professional or partner when purchasing to help with translating, navigating, and knowing how to avoid property scams that can take place.

Once you find the right connection, real estate in Colombia can be a great deal for open-minded expats and investors looking to relocate or for good rental yields in properties.

Expats and investors desiring a second citizenship can obtain citizenship in Colombia in as little as 5 years. This will require an investment in either property or business in the country itself, and at least one visit to Colombia each year in order to keep your residency active.

After spending as little as five years in the country, you can apply for naturalization. A Colombian passport is much better than it used to be and will grant you visa-free access to over 100 countries, including Europe’s Schengen Area and traditionally difficult countries like Russia.

As a dual citizenship country, you will not have to renounce your current citizenship to become a citizen of Colombia.

For more information on obtaining residency and citizenship in Colombia, visit this page or apply for help.