Slovakia has a new bill that allows citizenship by descent up to the third generation (great-grandchildren) of former Czechoslovak and Slovak citizens as an option for those with Slovak ancestry.

As a country that’s part of the European Union (EU), that has displayed strong economic growth in the last several years — especially in the digital nomad scene — and a Tier A passport with visa-free travel to 181 countries, this is quite an attractive offer.

You might be asking yourself, “Where is Slovakia?” Let us fill you in on the details.

It’s nestled in the heart of central Europe, east of its former another half, the Czech Republic, north of Hungary, and south of Poland. Its capital, Bratislava lies not far from the border Slovakia shares with Austria.

This region has seen its share of turmoil throughout history. Even in recent history, there have been troubles concerning citizenship. This citizenship by descent (CBD) program is an effort to restore citizenship to some who have been displaced by all the turmoil. This new program is thought to have over 800,000 eligible applicants from the United States (US) alone.

In terms of gaining second citizenship, it’s a relatively quick process and is definitely far cheaper than obtaining European citizenship by investment.

If you have a Slovak parent, grandparent, or even great-grandparent, you too could claim this European passport that is ranked as the 23rd-best travel document in the world on our Nomad Passport Index for 2021. It will open doors and opportunities that you never knew existed.

By acquiring a second citizenship, you can enrich not just your personal life but also your wealth management options too.

You’ll first need to work through your family tree, determine if you’re eligible to apply, take care of the extensive paperwork, and then play the waiting game.

The process for citizenship by descent process does get tricky at times.

Our experience in guiding clients through getting citizenship by ancestry in a European country is that it’s best to consult a professional to save you time and to avoid much of the headache that can come with the process.

That’s why we’ve established our all-inclusive service where we’ll do all of the work for you. We’ll take care of everything from eligibility checks to the application process so that you can enjoy your Slovak passport as soon as possible.

What is Citizenship by Descent? 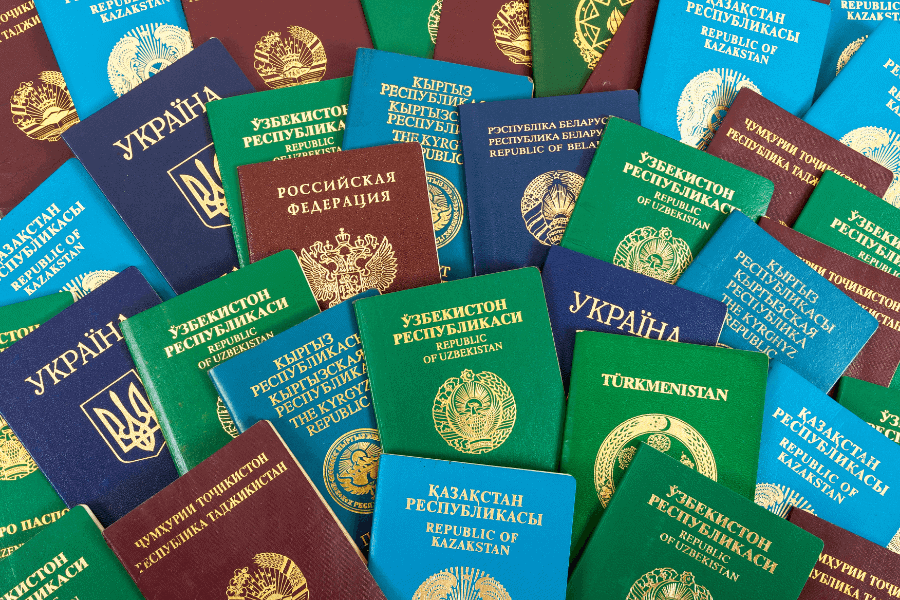 Citizenship by descent is often a faster, easier, and cheaper option for a second citizenship.

In terms of getting second citizenship, citizenship by descent is generally the cheapest and easiest route, plus it’s reversible if you find it doesn’t suit your needs.

This type of citizenship is granted to the direct descendants of a country’s national who has since left to a different country and may or may not even be alive anymore.

For example, let’s imagine you had a Slovakian great-grandfather who came to the United States seeking better opportunities. Then your grandfather was born, who later had your father.

All three generations that came before you could apply to be Slovakian citizens. You also would be eligible.

As long as you can provide the right documentation including birth certificates and other documents to prove your bloodline, you’ll be able to skip the naturalization timeline of permanent residence of eight years and obtain citizenship directly, for only a few administrative fees.

Citizenship by descent helps one reclaim citizenship that’s rightfully theirs but, due to various circumstances, has been lost throughout the years and across generations.

Various countries around the world allow people to claim citizenship this way, but most of them are located in Europe.

World Wars, a communist dictatorship, the splitting of Czechoslovakia into the Czech Republic and Slovakia, and the movement of people within the EU have led to many Slovaks living in other countries.

In 2010, Slovakia passed a law that prohibits dual citizenship except in cases of marriage and birth. This forced Slovakia’s very large diaspora abroad to then choose to retain and continue seeking naturalization in a foreign land, or to remain a Slovak citizen. They could no longer do both.

The main motivation for this law was in response to its neighbor, Hungary, passing a law allowing citizenship by descent.

Slovakia feared its 500,000 Hungarian population would become Hungarian citizens and thus quickly passed a law which said that if someone willingly sought citizenship in another country, they would immediately lose their Slovak citizenship.

Let’s take a look at who can apply.

Slovakia has made eligibility quite open and straightforward.

The main thrust of the bill is to re-offer citizenship to those who lost it between July 17, 2010, and the present due to the 2010 State Citizenship Act which no longer allowed for dual citizenship.

The bill also includes an offer of citizenship by descent up to the third generation (great-grandchildren) of former Czechoslovak and Slovak citizens.

If you can document through birth certificates and proof of residence that your parents, grandparents, or great-grandparents lived in former Czechoslovakia or Slovakia, then you will be eligible to apply for citizenship.

You will also be required to have a clean criminal record.

At the time of writing this article, the bill is still in Parliament so many of the specifics are not available, but from what we can tell the application process will be quite straightforward.

You will start by filling out the application form for citizenship. Once your application is completed, you will need to also prepare the following documents about yourself to submit with the application:

In addition to documents about yourself, you will also need to establish your relation to a parent, grandparent, or great-grandparent who was a Slovak citizen. The exact details are not available yet, but at least the following documents will be necessary:

Every application document you submit will need to be translated into the Slovak language or translated by a certified translator (found on their government website www.justice.gov.sk.) with the original document attached to the back of the translation.

There are some administrative fees that you will need to pay at the time of submitting your application. These fees vary depending on your situation but are generally under €100.

The Pros and Cons of Slovakian Citizenship 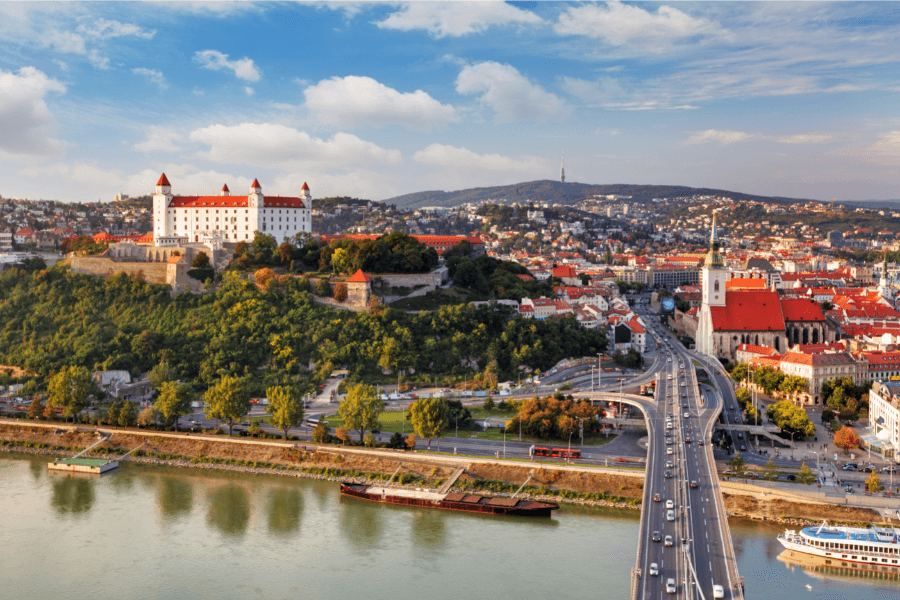 Slovak citizenship provides a Tier A passport with full access to the EU.

Obtaining any citizenship in the world has its pros and its cons, and Slovak citizenship is no different. Before you make any such move — like adding an additional citizenship to build your passport portfolio or moving abroad to reside in a foreign country – you should consider both sides.

So, here are a few things you should think about when it comes to Slovak citizenship by descent.

The greatest benefit and advantage to getting Slovak citizenship is access to a Tier A passport. A Slovak passport offers visa-free travel to 181 countries in addition to full access to the European Union and all the benefits of traveling, living, and working that that offers.

For example, if you want your children to study art in France, they’ll be able to, pretty much for free.

Or if you would like to spend your summers in Corsica, you’ve got it.

Your time and travel privileges in the European Union will be unlimited, and you’ll be free to not just reside but also legally work anywhere in the region too.

That’s why citizenship within the EU, in a country like Slovakia is a great Plan B.

Another benefit is that Slovakia is ranked in the top 25 for the safest places to live, beating out all of the CUNA countries (Canada, the US, New Zealand, and Australia).

Slovakia has also experienced great economic growth for the past 20 years. It has become known as the “Central European Tiger” due to economic policy changes that favor business development and have loosened many restrictions in order to attract foreign investors. There are great opportunities for expanding your business there, especially in the digital nomad realm.

Slovakia offers a system with no dividends tax, no wealth tax, no gift tax, and no inheritance tax. They also do not impose the restrictions on lineal descendants that some other countries do. It can be a great option for avoiding estate taxes.

An important and beneficial part of applying for Slovakian citizenship is that there are no language tests/requirements or Slovak history and culture tests as part of the application.

Their CBD program also allows you to go back three generations in your family history, where many other programs only go back two generations or set a cutoff date for when eligible ancestors were living in the country. This makes 14 possible relatives through which you could claim citizenship.

As of the writing of this article, the details of the program are being debated in Parliament. The biggest issue is a residency clause that will require those applying to travel to Slovakia’s capital, Bratislava, to complete the application.

If it is required to travel to Slovakia in order to claim your citizenship by descent, this could add a major step in the long process.

Another drawback is that, while the timeline for processing applications says that it will be completed within a 24 month period, there are several places where your application can be put on hold for further investigation or because of application backlogs, making the process much longer than two years.

As in many other citizenship by descent programs, there will be a waiting game you must play.

Is Slovakian Citizenship Worth Your While

This tiny country in the middle of Europe may have never crossed your mind, especially in terms of becoming a citizen. Until just recently, their no dual citizenship law prohibited even the consideration of that idea.

Now, however, if you can claim Slovak ancestors even up to three generations back, this citizenship by descent program can be a great option for you.

In terms of living there, you’ll probably need to learn the language as there’s not much English spoken, but it does offer potential business opportunities, especially in Slovakia’s capital, Bratislava.

If you don’t want to live there, but would like to make Slovak citizenship part of your passport portfolio, it is a great option for a Tier A passport. It will give you access to live, work, and travel through the European Union and visa-free travel to hundreds of other countries.

A Slovak passport will be worth your while if you’ve always dreamt of having European citizenship but have never had the means of getting one by investment.

For example, if you do business in Europe and would love to spend more than the 90 days at a time you’re currently allowed to spend in the Schengen zone, then a Slovak passport would be extremely beneficial to you.

If you have Slovak ancestry, luckily, Slovakia is a great country to claim citizenship by descent. Although the process can take a few years, it’s pretty inclusive and straightforward.

Is it a smart move for you? We can help you figure it all out.

Check out our all-inclusive citizenship by descent service, take matters into your own hands and expand your lifestyle and financial options.