Why is the United States called America?

To be honest, I didn’t even realize today was Columbus Day. I guess any excuse for lazy government workers to take a paid day off and celebrate – um, what exactly? – is reason enough to have yet another meaningless holiday.

Yet it’s especially apropos that Columbus Day would happen to come the day after I get into a bit of a Twitter war with an “American patriot” about an issue that has long troubled me a bit: Why is the United States called America?

In 1507, in a tiny town in Northeastern France, two cartographers set out a map of the new world. Martin Waldseemüller and Matthias Ringmann published the Universalis Cosmographia, their account of just what the world looked like.

For hundreds of years, the world had relied on Ptolemy’s ancient accounts of the world, which used an equator that moved with the longest part of the day. Of course, the Americas were entirely unknown to the rest of the world in that day, and the Universalis Cosmographia would change the course of history.

The Universalis Cosmographia was also the first time the word “America” was used on a map, or anywhere else for that matter. In a hat tip to Amerigo Vespucci, the cartographers defined the entire new continental land masses after him. 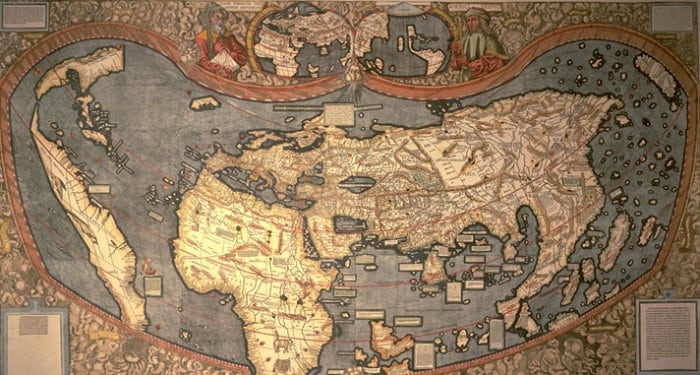 The Universalis Cosmographia, which named western land masses “America”. So why is the United States called America?

After all, we all learned early on that it was Vespucci, not Christopher Columbus, who actually realized he had found a previously unheard of land mass. What was colloquially called the “New World” soon became known as “America”.

Hundreds of years later, the organized government mafia in then-British colonies decided to call themselves the “United States of America”.

And over time, as American prominence in the world grew thanks to “Manifest Destiny” and the killing of Indians, people just started calling it “America”.

Just having a basic understanding of the English language should lead one to quickly realize the arrogance here. How can something BE something else if it is also “of” it? If the United States are OF America, certainly they can’t also BE America.

Perhaps, just like settlers who dropped of small pox-laden blankets at the nearest teepee, the concept of Manifest Destiny encouraged a newly arrogant nation to declare itself superior to the rest of the dozens of sovereign nations from Alaska to Argentina and commandeer the identity of two entire continents for themselves.

Think about it: would anybody go along with calling the United Arab Emirates “Arab”? Match the UAE’s name up to the same syntax used the United States and the UAE would be called the United Emirates of Arab. Why then do we not call UAE persons “Arabs” or “Arabians”? While such people certainly could be called Arabs, it is not a nationally identifying title, but rather an ethnic title.

Is it possible assuming the identity of two entire continents of nations could be just another “land grab” by a nation so hellbent on achieving superiority that it would bowl over entire races of people and cut in the proverbial line just for the United States to be called “America”?

The people who lived there before? They’re “Native Americans”; we’re the “real Americans!” (Apologies to Sean Hannity)

If some global body had a shrink to deal with national identities, it would have to conclude that the United States was molested as a child. Or has a really small penis. Why else would it need such acclaim?

I suppose when your military spending accounts for forty percent of the world total despite having one-tenth that share of the population, you can call yourself whatever you want.

Unfortunately, this arrogant attitude has been long continued. We know how the United States has bullied other countries into submission on everything from offshore banking to second passports and more. 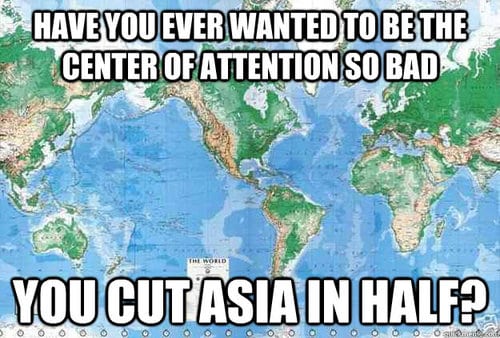 This world map has a point.

The IRS now has offices in countries around the world, all to spy on their slaves who left the pasture. US military bases dot over 100 sovereign countries; conservatives moan that their government provides “free defense” to other countries, but never think they should reduce their presence around the world.

After all, these weak-willed countries being protected by the United States didn’t have the gall to assume the name of a land mass comprising almost one-third of the earth’s land surface. Who are they to take care of themselves?

Perhaps they the United States is called America because encouraging people to do so was one of the earliest forms of government propaganda in the modern world. Put it right next to the idea that our place of birth, not our self-identified heritage, should define whether we’re “American” or “British” or “Australian”, as if our entire identities should revolve around which mafia’s patch of dirt we were born on.

Personally, I believe character traits die hard. When I was in Hong Kong this summer, I talked with a few women from New York who, despite there being no line of potential suitors lined up as there would be in The Land of the Free, were still rather snobby and actually dismissed my non-sexual approach as “just another guy trying to sleep [with us]”. You just don’t turn these things on and off like a lightbulb.

The same is true of countries. When you decide to jump over dozens of other countries and proclaim that you and you alone comprise “America”, it doesn’t end there. Such temerity is merely a precursor to greater arrogance, deprivation of liberties, and other fun stuff to come.

As for the Universalis Cosmographia created five hundred years ago, it was purchased by the Library of Congress awhile back for $10 million. I wonder, in the midst of the government shutdown, if the country would like that money back.