The government slaves that couldn’t get a Cambodian passport

I’m not a big fan of the United Nations. If you don’t know just how ridiculous, condescending, and useless the UN is, go take a tour of their New York building, where some pasty white girl named Doha will show you around in her authentic African maxi shirt that she personally knitted alongside Ugandan merchants.

Then again, I’m not a big fan of any group that organizes already oppressive governments and gives them even more firepower by cooperating. That also includes groups like the OECD, which help rich governments bully poorer ones and criminalize almost anything you could do with your own money. (Hint: they don’t think it’s REALLY yours.)

But there’s one thing I’m in full agreement with the United Nations on.

After World War II, the UN was born and began drafting its basic positions. The Universal Declaration of Human Rights was among those. In a rare stroke of genius, the bureaucrats at the United Nations declared:

Everyone has the right to leave any country, including his own, and to return to his country.

That’s all well and good, if you can actually enjoy that right. Imagine the irony that the same governments who joined forces to create the United Nations don’t really agree with that principle.

Here in Cambodia, getting a passport is a real chore. And it’s really expensive. I recently had coffee with a Cambodian blogger who explained just how hard it is to get a passport if you’re Cambodian. 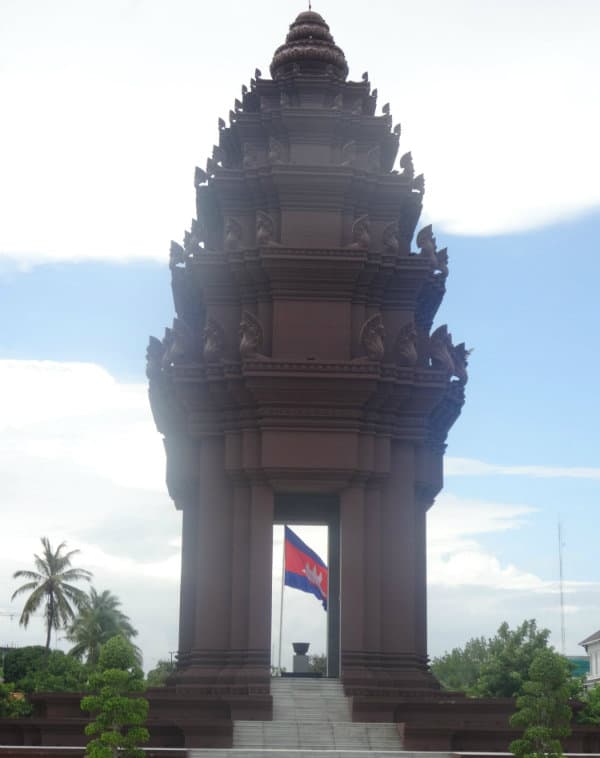 Independence Monument in Phnom Penh: While Cambodia offers decent personal freedom, many of its poor citizens are not independent enough to afford a Cambodian passport

In a country where workers with some English skills command $100-150 a month, the bare minimum cost to get a passport is $135. That’s about as high as the extortion fee in the United States. If you want your passport with any kind of speed (ie: you don’t want to be waiting around for several months), you can easily double that.

And the price goes up from there.

Basically, the average person can’t afford a passport here. They’re too busy throwing their money away on things like food and transportation to work and ratty apartments with sporadically available hot water. While it’s not that difficult to live a Cambodian-style life on $1,500 a year, it doesn’t exactly leave a lot of extra cash lying around.

Basically, the government has condemned a majority of its people to never leaving its borders. They’ve become government slaves, not even able to leave. Not exactly what the United Nations had in mind.

Just take one look at how many people live here in Southeast Asia and imagine the possibilities. The unemployed can’t find work in another country. Families living in neighboring countries can’t visit each other. The list goes on.

Forget about a second passport. These people can’t even get one passport. Whatever war, famine, genocide, or economic doom and gloom their government imposes on them is inescapable. They are people without options.

All because they couldn’t afford to scrape up a $135 tithe to the man.

And in some cases, it’s much more. Sticky fingers among bureaucrats can make that figure much higher. Corruption on the lower levels isn’t an issue here, but involve the movement of people and most governments start to smell the money.

This little phenomenon works both ways. There are countless stories of those who couldn’t LEAVE a country, even when they wanted to.

In a recent interview, my friend Pete Sisco told me how he legally spent several months in China, only to lose his passport – and his Chinese visa – at the last minute, and not be able to exit the country.

For all the hoopla governments put up about strict visa requirements and the length of your stay in their country, they made it quite impossible for him to leave. First, he had to go to one office to take fingerprints. Then to another to get his photo taken. Every once in awhile, he’d show up at a police station for this or that, and they’d ask him why he was there.

And just when he thought he’d completed all of the necessary steps to re-issue his visa, the bureaucrat in charge of visas would send him on another wild goose chase. All in search of a piece of paper with a stamp on it that gave him permission to leave a country that wasn’t his.

At one point, they even threatened him with fines and jail for overstaying his visa. He wanted to leave, but their bureaucratic paper shuffling prevented him from doing so. The irony would be laughable if it weren’t ridiculous. As Harry Browne said, the government is the only group that can break your leg, give you a crutch, and demand thanks for helping you.

That piece of paper Pete finally got came with quite a price. That’s how government keeps thousands of people on the public payroll.

But we know that the government, quite literally, wants to get you coming and going.