Tulum: the next big real estate investment in Mexico

The flight from Mexico City was about as good as one can get. Interjet is one of the newer airlines in Mexico challenging the Aeromexico monopoly, and the service really shows. Despite being in the air for barely an hour, we were treated to an array of free snacks, soft drinks, and cocktails.

And unlike the “rules first, service last” mindset of airlines in The Land of the Free, Interjet let us use our laptops until the final minutes before landing.

While Merida is somewhat removed from the tourist track these days, it has a rich history as a tourist destination. Before the Mexican government decided to build a beach resort in a little outpost called Cancún, Merida was the jumping-off point for those wishing to view Mayan relics like Chichen Itza and other ruins in the Yucatan.

Even better, Merida’s downtown is extremely charming. Some 6,000 Americans have moved down here to buy up historic properties in need of repair, renovate them, and either cash in or live here part of the year.

On the northern outskirts of town, not far from where Merida’s wealthy are moving, townhomes on colorful avenues cost as little as $70,000.

And compared to Mexico City, freedom truly is on the march in this part of Mexico. A friend of mine told me over drinks in Mexico City the other night that the Mexican capital has a bit too much government for his taste. The rest of Mexico, he suggested, is the real “land of the free”.

All the evidence points in that direction. Living in Mexico is an escape from the dwindling freedoms of the United States.

However, the real opportunity in the Yucatan Peninsula seems to be in Tulum. I’ve heard Tulum real estate mentioned by a few international investor friends of mine as the “next” big place in Mexico.

I asked several different people here in Merida what they thought about Tulum and all of their eyes lit up. I asked one of my contacts here what he thought about Tulum real estate and whether it really is a good investment in Mexico and he said, “I hope so; I own land there.”

For years, he said, a small group of Mexicans with an eye on future growth have looked at Tulum as the next big place.

While I’m a fan of beachfront real estate in Nicaragua as an undervalued and largely unknown investment, Tulum real estate near the ocean is a potential investment for those looking for a more developed market.

I’ll be in Cancun later today, and Tulum shortly thereafter. While Merida is charming and authentic and Cancun is the Disneyland of Mexico, Tulum is an unspoiled paradise. The place looks pristine. 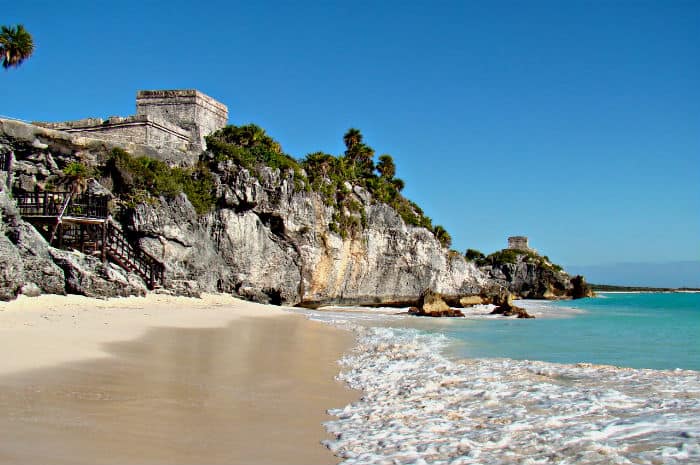 Tulum, Mexico: expats and investors claim it is the hidden jewel of Mexico’s Riviera Maya and the next big tourism project from which real estate investment in Mexico will benefit

The beaches boast white sand, and you’ve got everything from the jungle to Mayan ruins at your fingertips. The easily accessible Cancun and Cozumel airports aren’t far away, either, and roads in the region are good and getting better.

When you consider that this part of Mexico is jungle, you realize that development potential is somewhat limited in an area like Tulum. Condos there sell for under $200,000 at the starting point, and the rental market is stronger there than it would be in Merida, where I’d recommend renting.

For example, a three-bedroom condo could rent for as little as $500 per month in Merida. A smaller, less expensive condo could be rented nightly or weekly in Tulum. It’s the same thing I talked about when I suggested renting vacation homes in emerging markets on web sites like Airbnb last year.

And my contact here is on to something: Mexican tourism officials have an ambitious agenda to increase tourism in Tulum and the nearby parts of the Yucatan Peninsula four-fold by 2020.

Combine above-average cash flows with a possible development squeeze and you’ve got a recipe for future appreciation. I’ll have more details on Tulum real estate in the future, but for now, I can say it’s the place everyone in the know is talking about.

As well as Mexico is doing now, investing in Mexico real estate goes a little against my grain of finding undiscovered places. That said, as a lifestyle investment, I think there are pockets that will do very, very well in the mid-to-long-term.

I have a friend who is flipping homes in suburban Mexico City and doing well, but in an emerging market as developed as Mexico, I’d urge caution.

As to Tulum, however, if worse came to worst, I can at least think of worse places to live than 80 miles away from Cancun on the Riviera Maya.