I became an instant millionaire the other day. It wasn’t a particularly momentous occasion. Nor can I remember exactly where I was when it happened. For it was as simple as going to the ATM.

Of course, you might think all of the millionaires being created by the US government’s easy money policy is a problem. And you’d be right.

But here in a country where you can eat a meal for $1 or $2, there’s something funny about seeing cheap street priced in the tens of thousands. Here in Vietnam, where the Vietnam dong is converting at roughly 21,200 to the US dollar (what’s a hundred currency units between friends?), people have largely given up on the formality.

Everyone from hoteliers to waiters now routinely knock off the last three digits for simplicity’s sake. And while there’s talk of a Vietnam dong revaluation on shady websites, here the people expect their government to get it wrong.

They know that for years, governments embarrassed by devaluing their currency on a high level have issued the “new lira” or “new peso”; basically the same thing as before, but with a bunch of zeroes knocked off.

On the streets of Vietnam, it’s as if merchants have issued their own de facto new currency, citing prices as “ten” or “fifty” and tossing the cumbersome thousands of dong that a decade of devaluation has brought.

While there are some dishonest motorbike drivers who will try to lure you with prices they’re really quoting in dollars ($5 rather than 5,000 dong), the street has figured out a practical, voluntary solution for making their lives easier in the face of a failed fiat currency.

Also odd, however, is walking around town and seeing signs in front of banks offering 8.8% APY. A full ten or eleven times higher than some of the highest yielding liquid savings accounts in The Land of the Free. 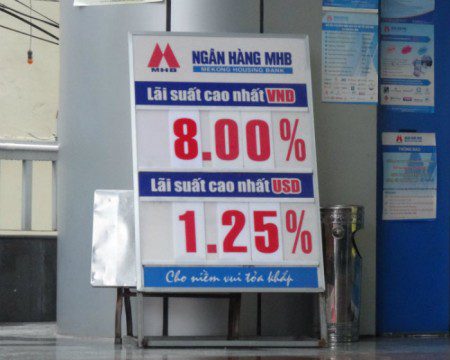 Effectively, banks are letting you make a bet on the future of the Vietnamese dong. In a country where asset conservation is a top priority and the shadow economy can bring higher yields and close-to-home sense of security, banks have to keep up.

It’s an obvious financial law that higher yields account for higher risk. Even at 8% passive yields, people are skeptical to stash their money in a declining currency stored in wobbly Vietnamese banks.

While many world currencies got crushed – but then recovered – against the US dollar in the wake of the 2008 crisis, the Vietnamese dong has continued its downward spiral. As a managed currency, it’s been devalued several times since then, dropping from it’s 16,000:1 level in 2008 to over 21,000:1 today.

While Vietnamese banks’ credit growth rate has dropped, both depositors and borrowers have felt the squeeze. Many businesses don’t even want to borrow money from banks at such high rates, but the central planning of the country’s banking system makes it impossible for banks to go their own direction.

One well-connected expert told me that, in his opinion, there is a “100% chance” of gold confiscation in Vietnam in the next couple of years. As I wrote from Hanoi, the government has cracked down on gold investment and may call for confiscation in order to “stabilize” the dong. (I think some ears are burning in Cyprus hearing that.)

Without such a currency “stabilization” (ie: fudging the numbers by theft), it’s debatable if the dong can even maintain its 21,000:1 level.

It’s possible that if the central bank was able to take everyone’s gold, they could prop up the dong enough for a temporary valuation boost. But if I have a choice, I’d rather not be an accessory to theft. 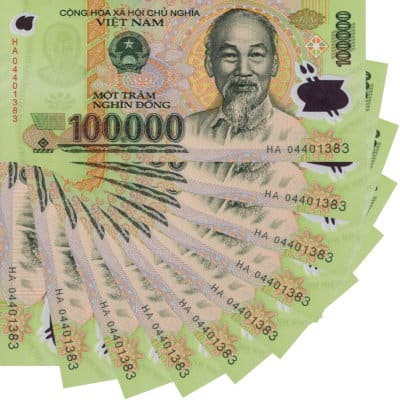 If you could deal with the high inflation, currency fluctuations, and underlying issues with the local banks, there’s a chance things might turn around eventually. Then again, there’s also a chance I could start dating Lais Ribeiro.

The dong can’t even come close to keeping pace with the devaluing US dollar. For years, it has been hawked alongside such strong currencies as the Iraqi dinar by shysters who claim that any day now, the Vietnamese dong could be revalued to 1980s levels when 500 dong would get you a piano lesson.

But you should know that lying with dogs leads to fleas. The central bank isn’t going to bring about a return to the good old days.

8% APY might sound nice, but I doubt you’re surprised that it’s no great deal with all things considered. While there are a lot of things I like about living here, I won’t be banking in Vietnam anytime soon.