Overregulation, crony capitalism, and the death of the free market

One of my favorite stories about starting a business overseas – in a frontier market, in this instance – is from Chris Tell.

It goes like this: let’s say you want to open a bakery. In the western world, you’d hire a realtor, find a space, pay “key money” to reserve that space, file articles of incorporation, pay a trademark attorney to check your name, send forms in triplicate to three-letter agencies, shout a bunch of four-letter words, wait for the forms to come back, pass environmental regulations, take a public health test, hire employees being ever so careful not to call some girl “hun” and get sued, buy equipment, file tax forms with different agencies, connect all of your finances to the government “grid”, promote your business (but not on a street light because that’s illegal), open your doors, and sell delicious muffins to a group of customers that isn’t growing and whose incomes are stagnant.

In the frontier market, the story is a little different: find a space, install equipment, start baking. Simple as that.

That overregulation that has made being an entrepreneur so difficult continues to spread through the west like a cancer. In societies where wealth and the desire to succeed has become evil, people bummed they can’t pay their mortgage could care less that you can’t build your dream business.

In parts of the emerging world, any business owner not in bed with the prime minister’s sister is pretty much praised for his or her contributions. Some people may wish they had a better life, but they understand that that better life will come through better employment provided by an entrepreneur.

So it was with a smirk that I recently came across a US news website describe their shocking, fact-finding investigation into the shadowy underground world of…

Yes, the western world has seen so much overregulation that it’s now news to see people eating in strangers’ homes. Imagine the horror. 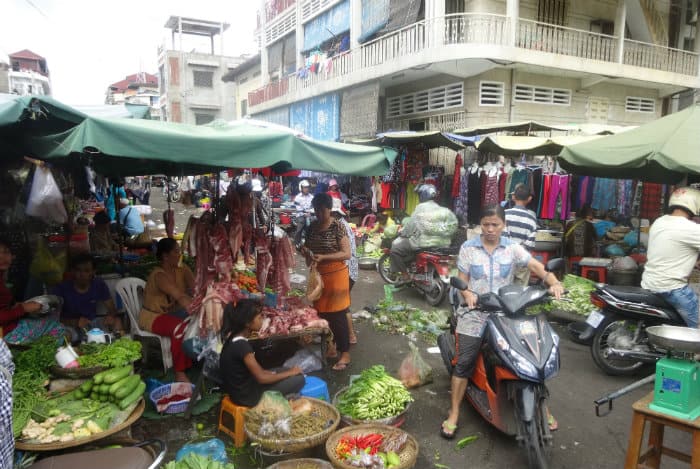 The opposite of overregulation: free market trading of vegetables in Phnom Penh, Cambodia

Here in southeast Asia, this kind of thing goes on everyday. In fact, I must have passed at least 100 such establishments while walking from my home here in Phnom Penh to my current perch along the riverside. In Asian culture, families place importance on a ground-floor residence where they can sell their wares – or their food – at street level.

While I enjoy an expensive meal every so often, I try to get a real feel for local culture and traditions by eating in these types of establishments. From Malaysia to Singapore to Vietnam to Cambodia, I’ve eaten in dozens of these street food stalls. While the owners often laugh at my tall body having to adjust to the tiny metal stools that are commonplace in these establishments, the food isn’t half bad. Some of it is downright delicious… even food cooked right on the street in a bicycle-drawn food cart.

It’s not luxury, but it’s how local people dine out.

And there’s nothing “super secret” about it. That, however, can’t be said for New York’s growing trend of underground restaurants.

One New York television station actually did a hidden camera investigation at one of these places. They found eight total strangers sharing a meal at a local resident’s dining room. A meal that said resident prepared herself in her own kitchen. With no government regulation.

Was this investigation conducted because some died from poorly cooked food? Or because they were beaten up and tossed into the dumpster in a nearby alley?

Nope. It’s big news because the western world has accepted such overregulation; a bunch of self-aggrandizing bureaucrats at three-letter agencies handing out permits to those that play their game.

Unlike the people here in Cambodia who serve meals on the street and wash dishes in a bucket of soapy water out front, their counterparts in New York are petrified of being caught. The New York City health department has indicated it will be cracking down on these unlicensed establishments, even if no one gets sick.

Isn’t the stated goal of these bureaucracies to ensure public health? If so, I haven’t seen a pile of food-poisoned bodies anywhere in Phnom Penh, nor have I suffered so much as a sniffle from my countless dining experiences at unlicensed street vendors.

Here in the “third world”, people use common sense. Check the quality of your food, go to places that are busy, watch food being cooked, etc. Locals gain a sense of where they should eat and where they shouldn’t. After all, there’s no established system for suing some old lady who cooks spring rolls on the street, and it’s not like she has any kind of money anyway.

On the other hand, I have personally gotten food poisoning from eating in a highly-regulated chain restaurant in The Land of the Free. Emerging world: 1, overregulation: 0.

The government’s restaurant regulations are nothing more than a market of crony capitalism. Those who play by their rules, pay the bribes (isn’t it all just bribery?), and agree to hang the stupid “A” or “B” letter sign on their door get the privilege of a government stamp of approval.

Have you ever voted for your local health commissioner? Who put him or her in charge, anyway? Or perhaps they just appointed themselves in a system of political back-slapping where one tyrant puts his buddy in a position to be another tyrant.

And so the death of the free market begins.