Asia loves gold. In Hong Kong, you can buy it at many banks if you meet their criteria. The Chinese love it. So do the Vietnamese.

You know that governments look to each other to validate their bad ideas. That’s largely why I believe the United States is such a destructive force; their bad ideas often get picked up, or even forced upon, other countries.

And not that long ago, the government of India started a racket of trying to stop their citizens from buying or even owning physical gold. During my time in Singapore, I saw huge lines of Indians in Little India, lining up around the block to buy gold, no doubt to safely store it for themselves and family members back home.

Now, the Vietnamese government seems to want to get in on the act. The currency here, the Vietnamese dong, is insanely cheap. $1 gets you 21,200 dong. While relatively stable the past year, it’s depreciated by double-digits against the US dollar in just the last couple years. It wasn’t long ago I remember your dollar only getting you 16,000 dong.

Having lived through over a century of wars and occupation by western imperialists, the Vietnamese have learned to take steps to protect their savings. And they know a bad deal when they see it. As if seeing their country’s economic growth drop from 8% to 5.5% wasn’t enough (although many countries would kill for it), they’ve seen a huge chunk of their wealth eaten away by currency devaluation.

And considering the Vietnamese people pay cash for purchases as large as real estate – some even pay cash for their house in gold – that’s a big problem.

I talked to a recent college graduate who recalled her parents not being able to afford piano lessons when she was little. At 500 dong, they were quite expensive all of 15 years ago. Today, you couldn’t pay someone on the street to spit on you for 500 dong.

While I love the personal freedom and lack of petty regulations here in Vietnam, the economic issues of concern to the locals – ultimately a decent barometer of an economy – are cause for concern. It only goes to show that no matter where you live, you can’t just plop everything you own down within one country’s borders and figure it will always be alright.

The same country that doesn’t give you a ticket for not holding the handrail may not be as accommodating economically.

As the Vietnamese currency remains somewhat unstable, the government has a plan to prop it up. Their answer is lying underneath the beds and in the cupboards of Vietnamese throughout the country. 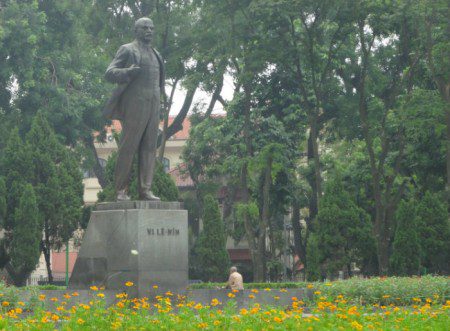 He would have ordered gold confiscation: the statue of Lenin in V.I. Lenin Park in Hanoi

Of course, many in the mainstream media are calling plans for gold confiscation a “conversion”. The Vietnamese people hold as much as 400 TONS of gold in their private collections. That’s more than the entire stash of the Bank of England. Last year, the Vietnamese came close to buying more gold per capita than the Chinese and Indians combined. This is a reflection of the culture’s value on tangible assets.

Because it’s estimated that much of that gold was “smuggled” in, the central bank figures they can “convert” the gold into dong deposits, forcing people to hold the very currency they wanted to avoid owning in the first place.

If you can’t win by hook, win by crook.

The central bank has already made itself the exclusive importer of bullion. To “reduce contraband”, of course. (If the US government thought it could get away with limiting gold purchases to “prevent terrorism”, they’d surely try.) State-owned Saigon Jewelry Company was also made the exclusive producer of gold bars, the preferred gold type in Vietnam.

Imagine if there’s a “shortage” one day. Oh, wait… the central bank is limiting sales of gold in the near future. Imagine that.

On top of that, the government put the kibosh on bank’s paying you interest on deposits made in gold. Up until last month, you could earn a whopping 0.5% a year at some banks for having them hold your gold. Now, they have to charge you a storage fee. Some banks have simply gotten out of the business.

As Vietnam’s economy slows, the stock market has collapsed, and property looks less attractive, Vietnamese are turning more than ever to gold. Just last month, it was reported that the over-the-counter price of gold in Vietnam was $217 over spot. Yikes.

The Vietnamese should understand the risk of gold confiscation. So should people living in bankrupt western countries whose governments need to shore up their balance sheets by any means necessary. I can assure you people in Vietnam will put up more of a stink about any actual gold confiscation – I’m sorry, “conversion” – than the average reality-show-watching American would. 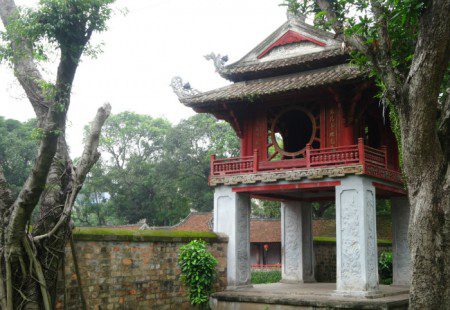 Hanoi’s Temple of Literature: Vietnam’s love of gold is cultural and goes back for years, through wars and imperialism

Not long ago, I wrote about offshore gold storage in Singapore. It’s a short flight from where I’m sitting in the Vietnamese capital now, and worth an investigation by westerners worried gold confiscation is heading their way. No matter how many times you can drive on the wrong side of the road and get away with it in a place like Vietnam, keeping your money safe is a separate matter entirely.

For now, the Vietnam central bank is making buying gold more difficult. Whether outright gold confiscation will follow is for you to decide. What you must understand is that the most important time to own gold is when your government is trying to stop you from doing so.

And rest assured, as much as the American ego wants to believe Vietnam can’t be an inspiration for anything (save how to win a war), the American government will be watching to see just what the central bank can get away with in this gold-bug society.