Finding the right place to live overseas can be a challenge. Here in Asia, some of the most livable cities come with steep price tags.

Barely one week ago, I was in Singapore meeting with offshore gold guru Torgny Persson, who will be speaking at our Passport to Freedom event next month. Living in Singapore is one of the most expensive things you can do.

In Singapore’s Raffles Place, home to all of the city-state’s bankers, a single cup of tea cost me $6. A shot of whiskey at the nearby riverfront pub costs $12 – during happy hour. That’s nothing compared to the S$74 (US$61) drink I had on Collyer Quay earlier this year.

Yet despite its great expense, Singapore ticks a lot of boxes for the more affluent expat.

For one, it’s super clean – to the point of being sterile. An excellent public transportation system takes you anywhere you want to go, including the award-winning Changi Airport. Things work efficiently, infrastructure is second to none, and people speak English.

Even the postal service is a testament to Singapore’s executional excellence. I have a few Christmas gifts I wanted to send to friends in The Land of the Free, and the lady at the post office was extremely helpful. It would have cost all of $14 to ship about one pound of gifts to the US in 5-7 days. That’s less than twice the cost to ship WITHIN the US, and almost as fast.

Ultimately, I followed the agent’s recommendation not to ship the gifts. Despite the quick shipping time from Singapore to US soil, she informed me that it frequently takes the US government several weeks to process certain items this time of year.
Score one for big bureaucracy.

Those who like the idea of living in Singapore do have other options in Asia, however.

I spent part of this weekend in Manila’s “Global City”, Bonifacio City. Bonifacio is still called “The Fort”, a reference to its former role as a US Navy base. However, while Makati next door is the tried and true central business district of the Philippines, Bonifacio is making a serious run at that title.

More on that in a moment… 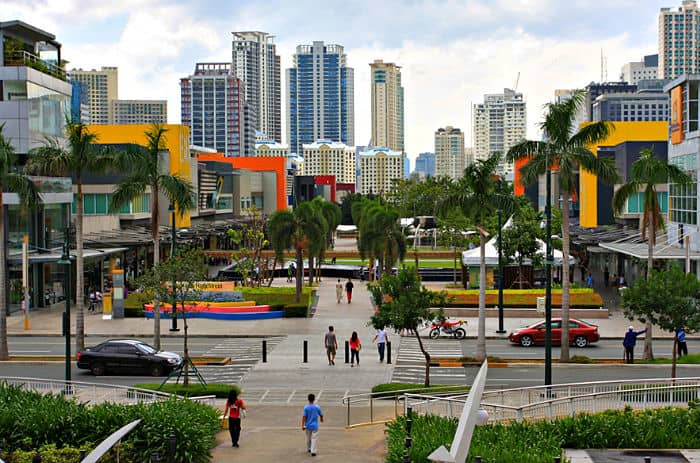 Cheaper than Singapore: Manila’s Bonifacio Global City is the Philippines’ answer to living in Singapore

I’ve written before that Makati, just across the freeway, is easily the best place to live in Manila. Condos are going up around the city within a city. Most business is done there.

But while Makati is home to one the world’s best (and largest) outdoor shopping malls – Greenbelt – and has plenty of very clean, upscale areas, the city itself still has a bit of grit.

Two weekends ago, I walked around Makati on a quiet Sunday. While the malls in Ayala Center were bustling, the quiet residential streets and busy commercial buildings had little going on. It was serene, but you still felt like you were in a big city.

Crossing the street involved a little work at times and you’d see the occasional piece of trash on the street.

Back in Bonifacio Global City, the atmosphere is almost serene. It feels like living on a movie set. Bonifacio High Street, the shopping center of this city created out of thin air, is a happening and upscale place, filled with pricey local restaurants, juice bars, and global brands.

There’s a PF Chang’s. There’s a California Pizza Kitchen. Crossing the street in Bonifacio felt like walking through Disney World more than dodging traffic in a city of ten million people.

While Makati is a happening place, it is diversified. As the central business district, it is home to call centers and even a red-light district in the north area of the city where development is still young.

Bonifacio has none of that. Many of the big banks are moving over from Makati, including JP Morgan and Deutsche Bank. However, the city is more of a residential and lifestyle hub where people come to live.

To be honest, the entire downtown area feels like one gigantic outside shopping mall in a Los Angeles suburb.

Catering to wealthy Filipino’s desire to separate themselves in an entirely un-Filipino enclave, developers have been building like crazy here. While Makati is still home to plenty of growth, many of the projects just moved here to Bonifacio, two miles away.

Prices are HIGHER than they are in Makati because of the seemingly backward reasoning that “the city is still developing”. Mid-level luxury condos that are barely a slab now are selling for $350-400 per square foot.

People have been flying in from Singapore snatching up entire blocks of condos, leaving most projects with no studios or one-bedroom units to pre-sell.

While I’m not sure I buy the logic on Bonifacio’s real estate prices, there’s no denying this is a truly global city. Besides the marginal American restaurant chains on every other corner, I couldn’t walk two feet without seeing a western expat or a Filipino-Chinese local.

This is the place corporate expats and the Chinese want to live. And Bonifacio’s idyllic, squeaky clean image is inspiring others to come in and fuel a development boom here.

It’s possible that, in ten years, Makati will see its status reduced from the hub of all commerce to a the home of government buildings and call centers. Personally, I’m not so sure I’d write Makati off yet, or let Bonifacio’s status as the new “it” town influence any investment in Makati, but Bonifacio is definitely growing like a weed.

For the family who wants to live and work in the Philippines but be able to distance themselves from all evidence of poverty or seediness, Bonifacio is a place to consider. For the $3,000 a month that would get you a small apartment in a good part of Singapore, you can get a sprawling three-bedroom condo in Bonifacio Global City.

Obviously the Philippines doesn’t offer the excellent wealth management and capital opportunities that Singapore does. However, Singapore doesn’t discriminate based on location, and it would be easy to live in your own little Bonifacio bubble in Manila.

For the budget-minded single person, couple, or family looking for a western-style life with plenty of amenities, Bonifacio could tick quite a number of boxes.

And unlike Singapore, you’d still have easy access to the rest of Manila or even the entire country to manage local businesses using lower-cost labor. It could be the ultimate geoarbitrage opportunity.