I’ve spent a lot of time in Jakarta’s upscale shopping malls the last week I’ve been here. While I do enjoy a good mall, it’s not that I’ve been shopping every day.

It’s that the absolute gridlock traffic here has prevented from me wandering too far afield. While I did spend Thanksgiving touring the Dutch old town of Kota Tua, Jakartans keep telling me to get out of the city and see places like Bali, Thousand Islands, and other more scenic areas of Indonesia, rather than bum around Jakarta.

So I’ve been hunkered down in mall cafes – some of the best in the world, I might add – meeting people and discussing business in Indonesia.

But with all the time I’ve spent in malls like Grand Indonesia, Plaza Indonesia, and Pacific Place, I’ve made an observation. And I’m afraid some of what I’m seeing is simply a classical international business mistake.

Walking by stores, you notice a trend. It’s all about fitting in with the culture of Indonesia. In a country that’s 88% Muslim – many of them traditionalists – that means keeping things like cleavage or showing lots of leg at a minimum. I’ve talked to people here who have showed me some pretty tame posters in store windows and said their more traditionalist parents wouldn’t approve.

For a country where a lot of people live with their parents before marriage, that’s a legitimate concern. Understanding this one fact alone will give you huge insights into youth buying cultures in Asia, considering countries from the Philippines to Vietnam to here in Indonesia often encourage children to live with their family.

Yet, some stores don’t quite fit in. I’ve passed by the Bebe store several times and never seen more than one person in there. Having lace crop tops and ultra low-cut bandage dresses in the window might not be the best way to sell product in Indonesia.

There’s no doubt that the younger generation is more interested in western dress and freedom of express. Girls who would never wear a bikini in Jakarta would be more liberal while vacationing in Bali (which is overrun by Australians). But that doesn’t mean the door is wide open to full scale “America” here.

If stores like Bebe have extensive research to show that there’s a niche population that will buy their products, and that the lower cost of labor here allows them to be profitable with lower volume, that’s great.

However, while I can’t speak for Bebe in particular, I know there’s a huge push by many companies to enter any and every emerging market they can. Some guy in a board room read an article about Indonesia and shouts “send a guy over there to open three stores!”

All too often, these guys don’t know anything about where they’re opening stores. It’s no secret that Indonesia is a Muslim country, but the international business research should go much deeper than that.

You have to know your market.

The downside to the huge boom happening around the world is that a lot of stereotypes get created. Just like all the guys who wrote books about “Dow 100,000” during the tech bubble, it seems every fund manager wants to find some country to call “the next China” these days.

That has created an environment where growth-hungry businesses dive into any market just to say they are there.

Victoria’s Secret is one company that does it right here. I passed by their store in Plaza Indonesia after having a tea at Starbucks, and their marketing seems more Indonesia-focused. Forget being more tame than their US stores; it’s a bit more tame than other stores in Asia.

I was hugely bullish on their parent company L Brand’s stock back in 2007 when they decided to pare off their clothing stores and focus on lingerie and beauty products, which have margins a crack cocaine dealer could only long for.

In addition to understanding how to market to the local population, Victoria’s Secret has made a strategic decision to basically be a fragrance store outside of the US and now the UK.

They have a valuable worldwide brand, they’ve chosen to cash in on it in a way that understands the realities of Asian markets.

While Victoria’s Secret is essentially a lingerie oligarchy in the United States, they’d be one of many players in the international market and would have to fight tooth and nail for share.

Why bother when you can slap up a photo of a supermodel in a T-shirt and sell scented water – a much more impulsive purchase – for $15?

Meanwhile, L’s much smaller La Senza brand also suffers from empty stores here, and has to compete in the general market with discounts and other gimmicks as it runs the same “imagine what you’d look like with breasts the size of volleyballs” marketing strategy American stores do. Perhaps it’s the canary in the coal mine.

Just look at the stocks of Bebe and L Brands and tell me which one has performed better over the past few years. One is up 600% in five years, while the other is down 10%. One company followed the rule of “Know your market”. 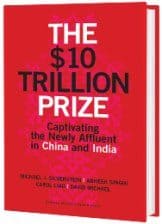 If you’re only going to read one book on international business and emerging economies, I recommend The Ten Trillion Dollar Prize

There’s a story in the fantastic book The Ten Trillion Dollar Prize (hear my interview with the author here) about how Nabisco practically left China with its tail between its legs due to its own international business mistake.

When Nabisco brought its Oreos to China, they barely made any changes from the American version of their famous cookies. Chinese turned their nose up and the Oreo was a huge failure.

It was only when Nabisco admitted that China was a different market – with a highly unique buying culture – that is started to succeed. A little research showed that Chinese consumers found the packages of a dozen or so cookies to be too big. It wasn’t an impulse purchase for them, and they certainly weren’t going to eat all those cookies in one sitting.

Then, Nabisco discovered that Chinese found the bitter cookie with creamy filling to be both too bitter and too sweet. Chinese palettes aren’t used to excessive sweet – there’s really no such thing as a dessert course in China – and the cream was overwhelming. Plus, Chinese consumers hadn’t been raised on the Oreo cookies and didn’t have any childhood memories of dipping the bitter wafers in milk.

In the same way Chinese consumers didn’t understand the idea of a fast food drive-thru, they just didn’t get it.

Competition in markets like China is fierce, and I’ve long said that emerging market entrepreneurs will spur cost innovations that will force even greater disciplines on western businesses. There are Oreo knock-offs here in Asia that compete on price. Oreo has to compete on quality and adapt to the market.

To think, Nabisco was literally on the verge of admitting a multi-million dollar failure after spending years spinning their wheels in China.

I believe stories like this are why multi-national corporations in China, India, and elsewhere are now moving toward hiring repatriates – locals who left to get educated and work overseas – rather than western expatriates.

It comes down to “know your market”.

There are certain concepts that just work better overseas – better than they do in their own country. KFC is the most beloved fast food restaurant in China and to a lesser extent in many other parts of Southeast Asia.

Forget McDonald’s; the Chinese are ga-ga for fried chicken. I can’t recall ever eating at KFC in the United States, but I was almost forced to eat there once or twice while in China.

Meanwhile, restaurants like Pizza Hut saw an opportunity to be real restaurants in Asia. Rather than just delivering mediocre pizzas, Pizza Hut in Asia is an experience.

Colorful, cheery-looking restaurants have become hangouts for families to enjoy nights out or teenagers to chill after school. The idea that Pizza Hut in the western world is a place you call when you’re flopped on the couch and too lazy to move is a foreign concept to Asians.

Obviously, you have to do your market research before starting any business overseas – whether you’re a startup or expanding your brand overseas. Knowing the market is more important than any brand cache you may have in your home country.

The first time in came to Asia, I was amazed by the number of brands that I thought had died long ago. They’ve repositioned themselves as successful western brands and are cashing in in new markets that don’t know that they fell out of favor in the west a decade ago. If they understand the market, that’s what’s important.

However, the biggest international mistake you can make is thinking that whatever works in your country will translate in another. As much as emerging market consumers want to emulate the western lifestyle, they want it on their own terms. A country like Cambodia with its small population might be more forgiving. A country like China will not be.

Taking successful ideas from the US and replicating them overseas can be good business, but there are plenty of minor considerations and adjustments that need to be made.

There are a lot of successful online businesses being replicated in emerging markets. However, entrepreneurs still have to understand that emerging market consumers, for instance, still suffer from low credit card penetration. That means adjusting the business model.

This is why I spend my time on the ground in places I see as potential business opportunities. Just seeing what goes on on a day-to-day business is amazingly helpful intelligence.

It’s that kind of on-the-ground crash course that could have helped some of the world’s largest brands avoid making huge international business mistakes.