How to start a business on the beach in Cambodia

None of this was here fifty years ago. After separating from the French, the Cambodian government created Sihanoukville out of thin air to serve as the country’s international port and increase commerce.

Business was booming then. Look at any bottle of local Angkor Beer and you’ll see “Sihanoukville, Cambodia” right on the label, a tribute to the then-startup’s first brewery here. Luxurious hotels were built, and Jacqueline Kennedy was even rumored to have stayed on one of the city’s other beaches.

It wouldn’t last, however; when Cambodia descended into civil war, the Khmer Rouge started using the city’s luxury buildings as target practice. Their claim that an American ship breached Cambodian waters led to the beach being left bombed out by the US military (another “liberation” mission, perhaps).

Even after the Khmer Rouge were deposed, the road to Sihanoukville was filled with looters and armed gangs.

Today, Sihanoukville is a bustling tourist attraction. The national road that leads here is one of the best in the country. I arrived this evening for a relaxing weekend and to see just what was happening here in one of the tourist centers of Cambodia.

It was a short walk to Serendipity Beach, a collection of loud tourist bars, restaurants, and touts. Freelance prostitutes readying themselves for approaches by retirees, kids lighting off sparklers over the Gulf of Thailand, and ad-hoc chefs cooking up freshly caught barracuda on the beach all make up part of the scene that makes Cambodia the Wild West of Asia.

Yet Sihanoukville is surprisingly peaceful. I made my way out to a dark pier to a bar identified only by the flashing red letters “AR” tied up by a rope above the walkway. I found a lonely bartender serving $1.50 rum and whiskey shots at the end of the pier: “24/7”, he tells me. As with everywhere else in Cambodia, this type of set up requires little regulation or fanfare from the government.

Mekong Whiskey in hand, I sit alone with an unobstructed view of the water and the beach. Across the gulf is a forested area with tiny bungalows hanging out over the water. On the beach, local Cambodians cook dinner over an open flame, a stone’s throw from women vying to be some retiree’s professional girlfriend.

With as perfect and serene as the weather is here, I didn’t want to leave to write this post.

But Sihanoukville, like much of the rest of Cambodia, is filled with opportunity for intrepid entrepreneurs.

One restaurant manager I spoke to over dinner told me the place is owned by three Americans who came to Sihanoukville for a cheap beach getaway. After all, bungalows right on the water can be had for $15 a night, as can more luxurious hotels just a short walk up the hill. BBQ barracuda meals are a mere $3. Cans of beer you can sip while overlooking some of Southeast Asia’s best diving spots are a buck. What’s not to like?

In the case of these entrepreneurs, there was so much to like that they decided to leave their capital behind and open a Mexican restaurant.

So, how can you start a business in Cambodia? The cost to get their restaurant started was all of $15,000, including rent deposits, furniture, and inventory. And their restaurant is literally a two-minute walk from the busiest beach in Sihanoukville.

As opposed to the capital city of Phnom Penh, where backpackers hang along the riverside for a few days and then leave, westerners are everywhere here in Sihanoukville. Distinctly American accents can be heard shouting “how’d you like a free drink tonight?” at the entrance to restaurants near the beach. You could blend right in here as a westerner.

That means that, on top of the already easy process of starting a business in Cambodia, doing so in Sihanoukville comes with extra benefits. If you favor developing resort towns over developing big cities, you could start any number of relatively simple businesses here and do rather well.

One local Cambodian I spoke to said he was putting the finishing touches on his new bar, with special amenities for western guests. His price tag: $5,000 for a small watering hole right on the beach.

Obviously the beach lifestyle draws a certain type of person to it. The good news is that you can literally hire Americans or Europeans like the ones I mentioned above for $500-600 a month or less. While that’s hardly cheap compared to the $150 you’d pay for a Cambodian with passable English, it allows you to take the culture shock out of the equation… and perhaps cater to a tourist crowd that prefers talking to people from the same part of the world they’re from.

Rents are cheap, as well. Ground floor locations in relatively new buildings lease for as little as $300-500 a month. 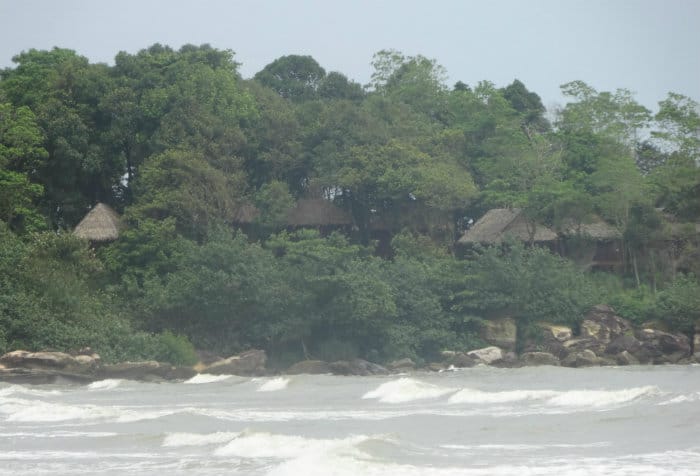 Beach bungalow, anyone? Beachfront accommodations in Sihanoukville start at $15 a night. I suspect more tourism demand will drive this price up sooner than later.

I’m a big believer in the continued growth of Southeast Asia and other emerging economies. As more people enter the middle class in this region, more discretionary spending will be created. That not only means that more people will move from bicycles to motorbikes to cars, and from cheap beer to craft varieties or nice wines, but they will also travel more.

While the newly wealthy in places like China are ga-ga for Hawaii and California, I’m putting my money more on places like Sihanoukville. It’s close enough to Bangkok, Ho Chi Minh City and, of course, the rest of Cambodia, to be able to benefit from increasing regional tourism. And it’s still really affordable for almost anyone to visit. My assistant in Vietnam said she and a lot of her friends will visit Sihanoukville for Chinese New Year.

And, unlike places like Hawaii, you can still make your mark in Sihanoukville. Yes, there is an abundance of restaurants, but a small level of innovation and class could set you apart from the rest. The fundamentals are on your side, and there is literally no international — or even regional — competition here. It’s nothing but mom-and-pop shops for competition.

If I were going to open a bar on a beach, I’d rather be competing with other people like me than with the likes of Hard Rock Cafe.

Now, if you’ll excuse me, I have to get back to watching the guys eating fire on the beach.