I have an appointment at the US consulate here in Phnom Penh today. I fully expect to be subjected to ridiculous rules, long wait times for my “appointment”, condescending staff, and even more fun. Why? Because large, cumbersome governments get a real thrill out of treating you like their slave. I’ve seen it first hand more times than I care to count.

But more on that in a moment.

We often talk here about the need to take action to protect your assets now, before bankrupt governments get even more bankrupt and desperate. One way do to this is through offshore banking. tAfter all, while it often takes massive government action – like freezing every bank account in Cyprus – to get the public’s attention, there are often plenty of little clues that happen way before those more extreme measures. Clues that should show the need for concern.

Like the fact that broke governments, the USSA included, are working to continually delay when they have to start paying out their Ponzi scheme retirement benefits because they raided the cookie jar and need to stall for time.

Or like the fact that the Hungarian government seized almost $14 billion in pension funds in order to avoid cutting the size and scope of their bloated government.

And on and on…

I mentioned my appointment at the US consulate today because that experience is indicative of how The Land of the Free views its subjects. To them, you’re not a citizen due any respect; you’re a subject and a milk cow there for their purposes.

It used to be that the US government wouldn’t have minded people keeping a few bucks offshore. Sure, like any government, they always had an inherent desire to control. But these days, they’ve turned the lever up way past full throttle.

That should be another main clue that the time to get at least some of your money out is now. 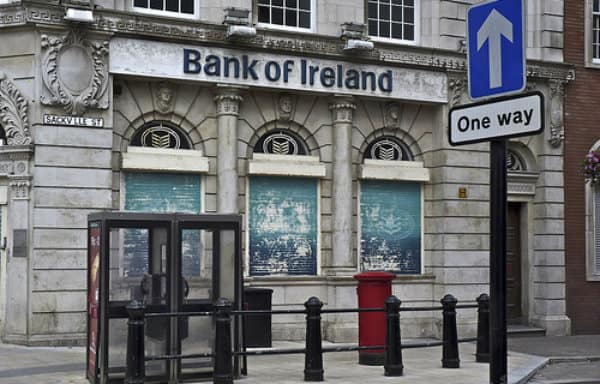 Isle of Man: Home to a shrinking list of offshore banking options. Bank of Ireland is closing its offshore bank there.

Due to a bad economy in places like Ireland and the UK, banks are being forced to cut back on operations beyond their base. As more banks do that, the options for offshore banking will narrow. It’s another example of government screwing up the economy, then blaming everyone else for their failures.

We know the US government is a big bully who frequently shakes down other governments to do its bidding. Just look at how angry Vice-President Joe Biden got not long ago when other countries said they’d decide for themselves whether Edward Snowden would be given asylum in THEIR country. The idea that other sovereign nations should be able to make their other decisions seemed completely foreign to old Joe.

And to me, the idea that the US government – or any other dwindling superpower – wouldn’t force its own banks to shut down their offshore operations or to stop accepting US depositors is quite likely. The US Treasury forced even healthy banks to take bail-outs during the economic crisis and then tried to tell them how much to pay their employees or if they should take junkets to Vegas.

Is it really so far-fetched to believe they’d work to shut down offshore banking altogether?

They’re already trying to do just that with laws like FATCA, which make accepting American depositors so difficult and costly for foreign banks that many just say, “Aw, screw it!” and ban US citizens themselves. In that way, the US government has plausible deniability, saying it never wanted to impose capital controls but merely strengthen its efforts on “tax evasion” and “terrorism“.

There’s nothing to say they won’t – and everything to suggest they will – continue to take it further, one step at a time.

Don’t think the banks wouldn’t take heed and goose step right along with them. In an effort to make more and more money at your expense, US banks have joined in lockstep with the government to do their bidding. JP Morgan, for one, makes $5.5 billion a year issuing food stamp cards for Big Government. Do you really think they’ll support your right to bank offshore if the government tells them to stop?

In the United States, the new Soviet Union, banks and businesses do what they’re told.

Back on the Isle of Man, the Bank of Ireland is just the latest offshore bank to close its doors there. It’s chilling considering just how much British citizens need offshore banking, too.

But let’s be clear: governments will never accept responsibility for their failed policies that close off your escape hatches. Once you accept that and understand that they’re looking out for their interests and not your economic freedom, you’ll realize the warning signs have never been more clear.