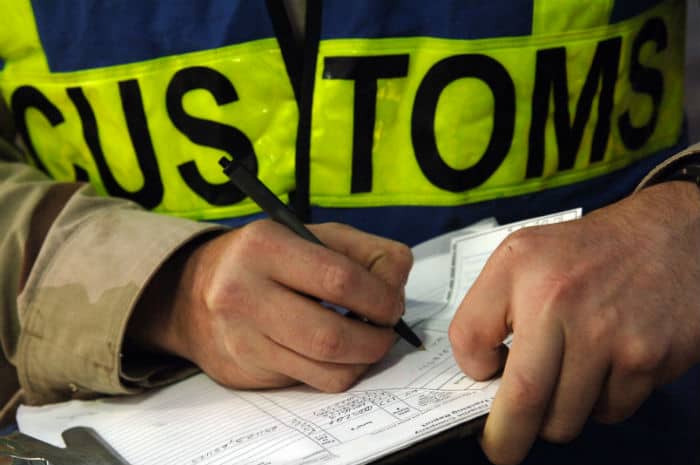 Just how bad can an immigration checkpoint be?

Has airport security become a threat to personal freedom?

I have to admit, I’m glad to be flying out of the USA today. While it’s nice to see a few friends that live here, I really couldn’t take any more of the overly buttoned-down political correctness.

And judging by the fact that I moved my flight up a day to avoid the two feet of snow about to get dumped on Chicago, I have to wonder why more people aren’t choosing to join me.

Having grown up in the American midwest, I know that there are good people here. But between the general fear of utilizing freedom, the high cost of living, the lackluster economy—and now the bad weather—I wonder what the appeal is.

For example, a couple weeks ago, US Airways damaged my bag on a flight from Arizona to Las Vegas. We’re talking total mangling of a high-end Travelpro bag built to withstand abuse. Leave it to an American airline to do that.

As frustrating as such an experience can be, it pales in comparison to what a friend of mine in Vietnam encountered recently. It’s a sobering reminder that your passport really is nothing more than a slave card … and that a government you don’t diversify away from will swallow you whole.

So, just how bad can an immigration checkpoint be?

My friend lives in Vietnam but holds a Myanmar passport. I have several friends from Myanmar and the consensus about their homeland is generally the same: the new, more liberal, government is just the same thugs dressed up in suits rather than military uniforms.

After a military junta took over Myanmar in the 1960s, things went downhill quickly. The assumption after “liberalization” a few years ago was that things were entirely on the upswing.

But, as a contrarian, I always felt that wasn’t exactly the case.

And the more people I spoke to in the region, the more I believed that Myanmar was just the latest hyped-up place for investors to try and break into, irrespective of what was really going on there.

My friend’s experience shows that. He went back to his home country—the place people tell you to be “patriotic” to and wax nostalgic about—and got arrested.

By his own country’s immigration officials.

Just as we have discussed how desperate governments will do whatever they can to keep slaves on their plantations, Myanmar apparently tried to keep my friend there without recourse.

Since when is it the home country’s responsibility to police what their citizens do abroad?

My friend told me he couldn’t even believe practices like that exist. If you don’t believe that your country could one day try and trap you within its borders so it can have its way with you, think again.

After all, it’s already happening in the United States. The US government has unsurprisingly appointed itself policeman of the world—down to the tiniest detail—by giving itself carte blanche to prosecute travelers for crimes they commit overseas. Arguing that some foreign governments can’t effectively prosecute crimes on their own soil, the US government so graciously agreed to do it for them.

If you’re 20 years old and following my advice to skip college and travel overseas, please don’t meet a 16 year old. If you’re a US citizen and return to the country, you could be prosecuted for statutory rape —even if your alleged crime was perfectly legal in the country in which it took place. It’s just another way the United States imposes its values on the rest of the world.

The US government has also taken it upon itself to impose an ever-increasing list of reasons for which it can deny your passport application, or even cancel a passport you already have. Owing the IRS money, owing child support, having a drug conviction… it’s all fair game for them to lock you within your own borders and deny you the freedom to travel.

What happened to my friend in Myanmar—a country that was run by a military dictatorship all of five minutes ago—is already beginning to happen in the United States.

In my friend’s experience, the immigration officers in Myanmar asked him for all sorts of proof he shouldn’t have had to provide. It’s none of their business to verify that he studied in Singapore a few years ago. Yet, the officers wanted “proof” of his travels.

It’s all about controlling individuals’ movements.

Then, customs officials demanded to search all of his possessions. My friend had a two-year-old MacBook Air with him—probably worth a few hundred bucks on eBay—and was told he’d have to pay a huge duty on the thing. They literally wanted thousands of dollars just so he could bring a computer with him on vacation.

On top of that, they wanted to charge him a “fee” of roughly $500 for not having the proper “paperwork”.

Ultimately, my friend caved in and spent a few thousand dollars (yes, really) on all the imaginary fees and duties the immigration and customs people could dream up. He told me he won’t be going back to his home country any time soon.

Now, you can say all of this is far-fetched. You can say it will never happen to you. After all, “America is the freest country on earth”, right? But the evidence points in the opposite direction.

I experienced something similar upon returning to the US through Newark Airport. When immigration officials weren’t amused by my failure to go along with their fake smiles and contrived interest in my life, they sent me to secondary inspection at customs. That secondary inspection turned into me being put in a large holding area with the kind of people the US government views as terrorists (i.e. anyone wearing a turban).

I was threatened with arrest if I said one wrong word. The entire vibe from the US officials in my case was about breaking me down and forcing me to “respect” them as they tore every aspect of my bag apart and left my belongings on the floor for me to pick up.

Then, I can only surmise, they put me on some sort of list because, as they said, “who goes to Italy for two weeks by himself?” My subsequent flights have always included secondary screening by the TSA.

It’s interesting to see how countries around the world are harassing their own citizens. It brings up one of the lessons we speak about on this site: don’t live in the same place as your citizenship. If you’re a US citizen, get out of the country. If you have a second passport in another country, try and find somewhere else to live. I’d rather you get a second passport from a country you’re not a huge fan of (as far as daily living) in order to protect your freedoms.

Because, whether it’s Myanmar or the USA, plenty of governments will be happy to shake you down for fun and profit.