Canada’s second class citizens and the culture of fear

In 2014, Canada’s Conservative government passed a law that effectively created a two-tier citizenship program. In 2015, that law went into effect, making second class citizens of anyone who wasn’t born in Canada.

Under Bill C-24, Canadians born in Canada can never lose their citizenship, no matter the crimes they may be accused of. Canadians with another nationality, however, aren’t as lucky and could be stripped of their citizenship for various reasons.

Of course, the bill was created in the name of the government’s favorite safe word: terrorism. Bill C-24 states that citizenship can be removed on the basis of crimes that threaten Canada’s national security, such as terrorism, espionage, treason or other demonstrations of disloyalty to Canada.

This list is a rather slippery slope of offenses that experts suggest could be expanded in the future.

Even more alarming, the bill not only punishes such criminal activity by revoking citizenship, but also by exiling offenders, something that has not been in practice for hundreds of years. Bill C-24 has already been used to revoke the citizenship of a (former) Canadian.

The bill has created quite a bit of controversy in Canada and Trudeau’s new liberal government has proposed a new bill that would repeal Bill C-24’s most controversial parts.

Bill C-6 would repeal the government’s ability to revoke citizens of their citizenship on the basis of threats to Canada’s national interest. It would also reduce the time permanent residents must live in the country before applying for citizenship, and would bring other changes that are more favorable for immigrants.

The bill passed the Canadian House of Commons in June, but the vote was postponed in the Senate until after the summer break. Nevertheless, the Senate should pass the new bill by the end of this month (September).

Second class citizens are only a symptom

While the new liberal government is working to repeal the worst parts of Bill C-24, the whole ordeal has revealed the real issue at hand: fear.

Second class citizens are only a symptom of a culture of fear.

A study by the Angus Reid Institute found that 53% of Canadians say that the bill should NOT be repealed. What’s more, support for repealing the act is dismally low at only 21%. While Conservatives are the greatest supporters of keeping Bill C-24, even Liberals and New Democrats support the bill in the 40% range.

People are afraid, and fear has never been a loyal friend of freedom

Now, I’m not here to be an alarmist. The government is not going to come snatch up your passport tomorrow. However, this is a trend we need to understand: people in the West are freaked out about terrorism. When that’s the case, the government can manipulate any of these buzzwords like terrorism to do whatever they want.

It’s the reason they banned burkinis in France. It’s the reason French mayors refuse to lift the ban despite a court ruling reversing it. Fear is the reason governments throughout the West can continue to limit civil liberties. In reality, fear can motivate people to freely forfeit their freedom; and when they do, they forfeit yours as well. 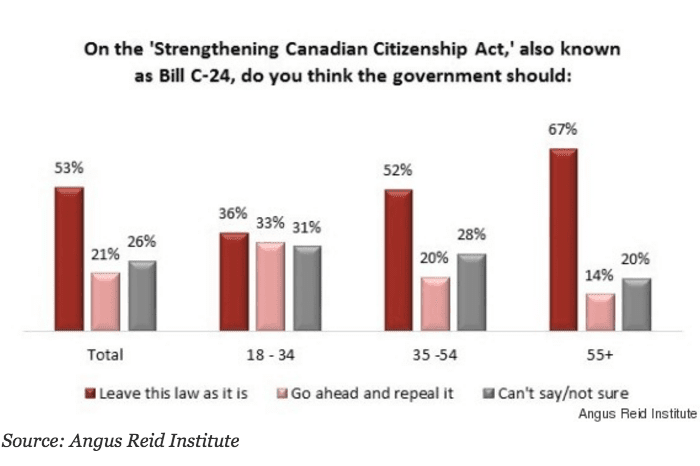 53% of Canadians want to keep the bill that has created second class citizens of their fellow Canadians.

Even as the Trudeau government is working to repeal Bill C-24’s second class citizenship, an even more invasive bill aimed at strengthening Canada’s national security has 80% approval rates across the country.

As one Canadian civil liberties organization put it, Bill C-51 “proposes a myriad of radical changes to Canadian law and to Canada’s national security apparatus, many of which seriously jeopardize the rights and freedoms of Canadians while promising little improvement to public safety.”

I don’t know about you, but I find it chilling when — not just a majority — but an overwhelming majority of the population is in favor of greater security at the expense of freedom.

It’s all about the culture of a country. And this same culture of fear and the belief that the government has the right and responsibility to make everything perfect at the expense of others’ freedom exists all throughout the western world.

The fact that Bernie Sanders can get so much support in the US in this day and age means that your country is headed in the wrong direction. Though I agree with Bernie that we need to make taxes fairer for expats, the fact that he wants everything to be free shows you the direction the country is going.

I guarantee you that in the countries where you should be investing, people don’t want everything for free. They understand the price of success and respect those who have paid it.

Where does it stop?

Conversely, the same people in the West who have no qualms with depriving people of their citizenship or decreasing freedom in the name of security have no problem taxing away your wealth either.

Like I always say, people are in favor of taxing the rich, but eventually, they’re going to be the rich. Eventually the rich will be anyone making $10,000 a year.

Even today, 63% of Americans couldn’t pay a $500 surprise repair bill or a $1,000 emergency room bill if the need arose. If you have anything more than that sitting in your bank account, you’re rich! If your car breaks down and you can fix it without a sweat, you’re rich to those people!

The same factors that stimulate a culture of fear contribute to the resentment and hostility towards business and success in the West of today. When I consider the slippery slope that backs policies in favor of renouncing citizenship in the name of national security, I worry about other basic freedoms.

Again, I’m not saying that all your freedom is going to vanish tomorrow. I don’t want to be an alarmist. However, I do recognize that governments — and apparently a large majority of the population — are looking for reasons to justify more control over a world they feel is in chaos.

They always start by saying “This is so reasonable! It’s only for terrorists.” Well, who’s a terrorist? What about domestic terrorists? And what is a domestic terrorist, anyway? Why not revoke the passport privileges of people who’ve committed wire fraud too, the most over-utilized accusation on the books? Again, they can set the terms.

Once you start picking up the rug, things start to creep in. It’s like the four-minute mile: once one person runs it, everybody can. Then it’s all about going even faster. It’s the same way everything else has crept in. So where does it stop?

You determine your personal freedom

To be honest, I don’t know where it stops. And rather than wait around to see how many liberties will be taken away under the guise of security, why not go where you’re treated best? Why not go to a place where there is no talk of revoking passports? Why not go where your business and investments are appreciated by both the government and the culture?

If you’re from one of the CUUNA countries where they’re tracking everything that you’re doing, then it might be a good idea to be a citizen of a country that doesn’t track your every move and isn’t breathing down your neck. That’s why I like smaller countries that aren’t trying to take over the world.

Does anyone think that Ecuador is going around tracking your every move and trying to take away people’s passports? Probably not.

The only thing I’ve heard of these smaller countries taking away passports is a law in Paraguay that stipulates that once you become a naturalized citizen, you have to check in every once in a while to maintain your citizenship or they might take your passport away.

But no one is going around in these countries secretly tracking your every move in a government-led witch hunt to ensure you’re not a terrorist. That’s a problem of western citizenship.

When governments and the general populace are looking for greater control, it’s important to set up a Plan B. You cannot depend on one government to reverse controversial laws instituted by another. You don’t have to leave your freedom in the hands of people who are too afraid to value their own. But you do have to act if you’re going to enjoy full freedom at a time when second class citizenship is a reality.