Prosperity vs. regulation: you’re poorer thanks to your government

Dateline: Kuala Lumpur, Malaysia Almost ten years ago, the bureaucratic thugs at the Organisation for Economic Co‑operation and Development got together in Bangladesh to discuss how to increase business and reduce inequality in frontier economies here in Asia. These events are the last place people like you or I would want to be. I can only imagine the political correctness as bureaucrats fawn over each other and discuss their latest fancy words for stealing your money and hacking into your email. As someone who pays his own bar tab at the Four Seasons, even the lure of a high-priced hotel room funded by tax slaves wouldn’t be enough to get me to such a drone fest. However, that one particular convention produced a very interesting result. The economic do-gooders at the OECD – they’re the ones fighting to eliminate tax havens, give all governments total access to your every financial detail, and impose a global wealth tax – surmised that frontier markets like Bangladesh and Myanmar need to clean up their regulatory framework if they want to attract business. Now, the goons at the OECD wouldn’t know the first thing about attracting business if it hit them upside the head the same way their high-priced call girls did in the posh, taxpayer-funded suites. These are the same people that, along with the US government, have lobbied to shut down offshore tax havens and economic citizenship programs in an effort to make the entire world “financially transparent”. Never mind that, without its citizenship by investment program, the government of St. Kitts would be up an even worse creek economically. It is only because they cater of wealthy foreigners that St. Kitts have any resources of its poor population to begin with. But it is ironic that the same people who are encouraging a non-stop parade of new, business crippling regulations in the western world are pointing to regulation in the emerging world as a barrier to business. Of course, they are right that business and capital follows my oft-repeated Five Magic Words: “go where you’re treated best”. That is one reason that capital is leaving countries like the United States, Spain, and even Switzerland as better opportunities and better treatment become available in places like Singapore. One of my good friends in the gold business recently told the audience at a private mastermind event that his clients are leaving Swiss banks for the perceived stability of Hong Kong and Singapore. Meanwhile, regulation in the western world is up. Defenders of bloated social welfare states can beg to disagree, but even former White House hack Jay Carney said, “We dispute their numbers. We don’t have hard, concrete numbers, but we dispute them.” Socialists can pull their own version of “let’s go back to the 1950s” as they pine for higher income taxes on the dreaded wealthy, but the reality is not only has the top effective tax rate never been higher, but the impact of regulations has never been higher. One group that actually put together a well-researched estimate found the cost of regulations on US businesses alone to exceed $2 trillion a year. Half the annual federal budget is not exactly the tiny sliver of the economy the Obama administration wants you to believe it is. Even as the government tried to complain about such a figure, they were caught off guard when it was revealed that one of the sources they were panning as inaccurate was their own Small Business Administration. Among those regulations, economic laws were far and away the most punitive, costing businesses $1.45 trillion. Each. And every. Year. Environmental, occupational hazard, tax compliance, and the always-fun “homeland security” rounded out the list. Western governments love to tell you how accountable they are by saying that rules that severely impact business owners like you and I will get a thorough review by some bureaucrat that couldn’t care less how things turn out. Last year, the US government created 3,500 new regulations – three times as many chapters as are in the Bible and the Quran combined – yet only fourteen got any kind of review. Meanwhile, the number of expensive regulations believed to cost businesses more than they create in voodoo value to the government is rising. One academic suggested that the Obama administration should get a pass on the large number of expensive regulations it has issued on the basis that the regulations that cost businesses a lot to implement are increasing on the basis of inflation. Only the government could put together a group of misfits to ruin the economy and tank the currency, then point to their failure and claim they’re not to blame. And, as is the usual for government, many regulations that aren’t regulations per se aren’t being counted toward the totals. Which means the cost of doing business in places like The Land of the Free is even higher than the most aggressive estimate out there. Things are no better in Europe, where a group called Open Europe quickly found two dozen substantial regulations in the United Kingdom where the cost to the government is greater than any benefit they get back. That doesn’t even include the cost to small business, which the government is happy to let shoulder the cost for their pet projects. In the UK, just 100 regulations cost businesses more than $40 billion a year in profits. Running a business in the west is becoming increasingly expensive and increasingly difficult. Having run businesses in the United States, I’ve heard all the horror stories from fellow entrepreneurs who were run out of business by some loophole written by a bureaucrat to allegedly do good. The end result in every single case was either a business owner losing his or her life savings and going out of business, or the business being crippled in some way. Meanwhile, studies have shown that real income has declined as regulation has increased. The more regulations, the poorer we all are. Take a look at one chart: 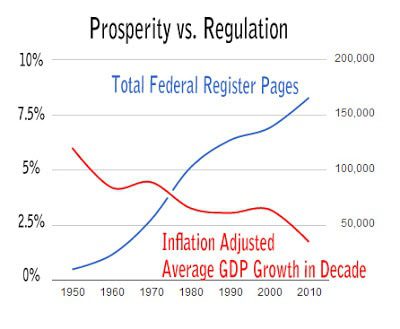 As we frequently discuss here, actions speak louder than words. Politicians love to stand underneath signs that proclaim their great work in creating jobs and talk about being “open for business”. Yet western governments are singing a different tune once the campaign ends. Thousands of new regulations are putting the burden for any number of stupid government programs onto small business owners like you and I, all the while pitting the voting public against business for the benefit of politicians. This is the playbook that has played out throughout history. While most people where you live probably don’t know what their leaders are up to, politicians in places that need an economic boost do. That’s why governments in up-and-coming places are rolling out the red carpet for businesses. Not just in theory. Not just with empty words. But with facts. I’ve shared before how the Republic of Georgia reduced the number of taxes it charges from 21 to just six. All in record time. The country has perhaps the world’s easiest visa policy, too; almost anyone from any country can come and stay for 360 days visa-free. That, combined with the ease of doing business there, makes Georgia a growing contender for new business. In Europe, countries like Estonia are attracting business from elsewhere in the EU with their 0% tax policy on retained earnings. Countries like Montenegro and Bulgaria flaunt single-digit tax rates and ease of doing business. Meanwhile, countries in the emerging world – the ones the OECD is complaining about – are less prevalent than bureaucrats want you to think. That’s because countries like the United States spend their time and resources sending government goons out to inspect every homeowner building an extra bedroom on top of marshland. The rest of the world doesn’t. Just because a country has regulations on the books doesn’t mean it enforces them. The United States and EU are places where bureaucrats love citing businesses and causing chaos, whereas the picture is much different in the rest of the world. Finding the best places for low business regulation is kind of like finding the most charitable people. The best ones are rarely the ones shoving it in your face. While the US government churns out laws like the “Reducing Regulatory Burdens Act”, they turn around and do anything but reduce burdens. In fact, they love adding burdens to business. Meanwhile, the Georgias and Estonias of the world get little press from the mainstream media. Most business owners, let alone the general public, don’t even know they exist. Yet those who include them as part of their global business strategy will benefit from far lower costs not only as far as taxes go, but as far as the costs of business compliance. Even Hong Kong offers business owners and employees a like a great deal, with employees being able to keep almost all of their salary and the employer paying a few hundred dollars a year in social insurance costs. When government gets out of the way, business thrives. If you want to thrive, you need to find a place where they get out of the way.