How To Avoid Offshore Scams

In June of 2015, Gregg R. Mulholland — the secret owner of Legacy Global Markets S.A. and a dual citizen of the US and Canada — was arrested at the Phoenix International Airport.

Until it was indicted in September 2014, Legacy Global Markets S.A. was an offshore broker-dealer and investment management company set up in Panama City, Panama and Belize City, Belize.

Mulholland’s fraudulent network included stock promoters, lawyers and broker-dealers who all used aliases and sham companies. Mulholland and his network fled the US when they were indicted, but the FBI finally caught up to Mulholland in June.

While starting an offshore company or making offshore investments is completely legal, this story is one reminder that there are people in the offshore world who not only do things illegally, but they also do so in sophisticated ways.

Here at Nomad Capitalist, we do everything to the letter of the law to ensure that all our dealings are 100% legal. In my years of traveling, investing, presenting conferences, etc. I’ve run into any number of guys offering shoddy investments or outright offshore scams.

Some have even tried to get me to pitch their “investments” at conferences, but none of them ever stand up to scrutiny.

Other conference speakers aren’t always so suspicious and often won’t do the proper due diligence, leading even credible presenters and lawyers to promote people who have been or are being investigated by the FBI.

I’ve even witnessed cases where these guys will go to conferences they’ve heard about and then hang out in the lobby, waiting to invite attendees to their villa or hotel room to talk about their investments — essentially trying to increase their credibility by passing as someone who is involved in the conference.

These types of offshore scams can get pretty crazy.

The concern for anyone looking to go offshore should be how to avoid such scams and illegal activity. There are definitely challenges in the offshore industry, and this is one of them.

So, how do you get the benefits of oversight without having the government do it?

From my years weeding through the scams to find the real investment and business opportunities, I’ve been able to identify some of the best strategies and practices that will help any honest businessman or investor avoid offshore scams.

Some of the strategies are general rules to be followed, while others are more specific steps you can take to ensure that you are doing everything in your power to make smart, legal investments. 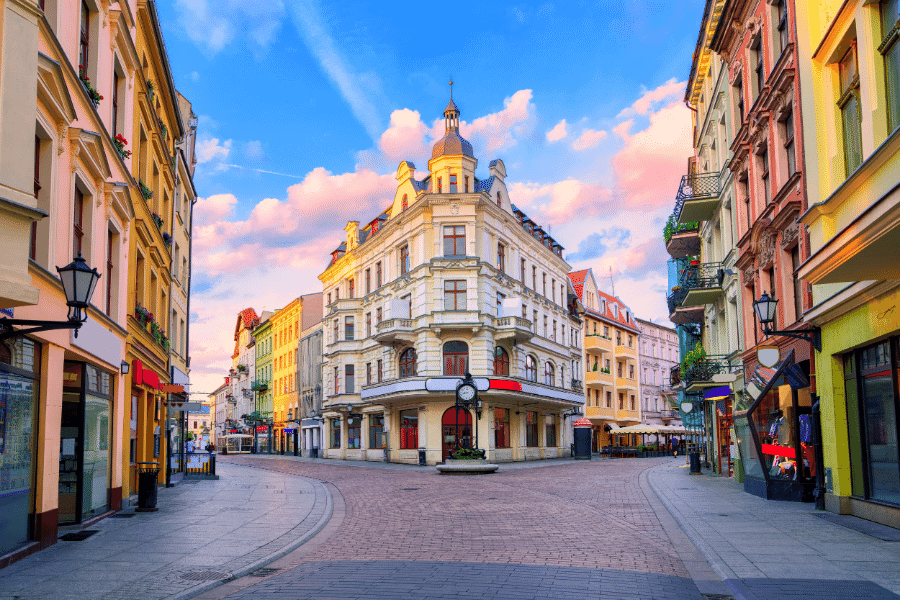 Torun, Poland: If you are in new territory, don’t make the mistake of thinking that you can only operate in the country through other foreigners. Learn to network to find the right local connections.

First, find a trusted referral source. Some of the people out there can be real bozos. Others just don’t do enough investigation (think of that one acquaintance you know who always gets excited about investments that end up failing horrifically … every time). That is why it’s important to find somebody you trust.

And that is true whether the person is referring you to investments, business opportunities, or to other contacts.

And don’t settle for just one trusted referral source. Instead, you should work to build a network of people you know and can trust completely. If you are committed to going offshore, having a network is essential; a non-negotiable key to success.

What is negotiable is the way you go about building that network. For one, you could pay to go to the country or specific city of interest and use general networking techniques, perhaps starting by finding a lawyer and building from there.

Another option is to come to my country-specific events where I show you how to build a solid network. Keep in mind that my method isn’t a turnkey investment. Instead, I’ll show you what to do and introduce you to the right people. One of the important benefits of having a group like this is that our contacts are vetted and you can network within the group.

Also realize that you don’t always have to deal with someone from your country. For example, if you want to invest in real estate in Eastern Europe, maybe you need a guy like me to help introduce you to people there who can be trusted, but don’t think you always have to be dealing with an American.

However you go about building your network, pay enough to do things right. In my experience, I may be in a country where I’m trying to get a second residence or another benefit through a real estate purchase and, instead of trying to find the best deal or the cheapest legal help, I will choose to hire the best lawyer in town to ensure that the job is done right.

Now, I’ll be upfront with you and admit that I often overpay for those services. However, it’s not because I’ve been scammed, but rather because I want to work with the best people. That’s the kind of vibe I want to attract. And I’m willing to pay for it.

So, if you’re going to do business offshore, you may overpay, but do it by design.

Another way to avoid scams is to go for less flash. When you do something a little different and not so flashy, you’re taking yourself off the path where most scammers set up shop.

For example, going to Panama and buying a condo is “the thing to do” nowadays; which also makes it easier for someone to set up a system that takes advantage of the masses in what appears to be a credible operation.

And even if you choose to buy a condo and don’t get scammed, chances are you’re not going to do as well as someone who actually digs a little bit deeper and has the right contact.

We see a lot of people who get sucked into the shiny object syndrome trap and jump to the next big thing; but more often than not, the shiny object they’re running after won’t change their situation. They’re more interested in chasing down and collecting X, Y, and Z in Panama or wherever else than they are in solving the problems that have them out looking for something new.

Not every high-net-worth individual needs an offshore trust. Not every citizenship program you see advertised on Instagram is legitimate or works as promised. There is no silver bullet residence to perfect every nomad’s tax situation.

Every situation is going to require a specifically tailored strategy.

So, stay off the beaten path to a certain extent. Obviously, it can be scary to blaze your own trail, but it has its rewards. By going where others haven’t gone you increase the probability that the area won’t be as saturated by scammers.

If you follow what everyone else is doing, you’ll probably just get sucked in.

I have personally invested in places like Georgia, Armenia, Colombia, and Malaysia – locations where many people haven’t even started investing but that have all the successful offshore fundamentals.

You want to make sure that any investment you’re looking to get in on has reasonable rates of return. For example, I have one friend in agricultural investment doing 10-12% a year. I have another guy who is investing in peer to peer notes in the US who claims he’s making 15% a year. You’re probably not going to make much more than that in real estate.

In some cases, people will pull their return stats out of nowhere just to get you on board, so make sure that they are giving you reasonable rates of return.

Not only does it make you more prone to offshore scams, but you won’t get anything productive accomplished without a plan of action.

Instead, ask yourself, “What’s the objective?”

So, which one is it?

Is your objective just to make as much cash flow as possible? If so, maybe you should start a business. If you don’t have a business, what’s the objective? Is it stability? Security? Getting your money out of a certain country and putting it in a different place?

If you don’t know your objective, the first step to ensure that you don’t fall for offshore scams is to figure it out and make a plan. Otherwise, you’ll just be running around like a chicken with its head cut off. And that’s obviously not going to get you anywhere.

I see people making this mistake all the time. They look at every different opportunity out there without actually knowing what they want and it makes them vulnerable. It might even be that they don’t get scammed, but because they don’t have a plan they end up with something that doesn’t really work for them.

In summary, know what you want, don’t get distracted by “shiny objects” or what everybody else is doing, design a plan based on what you’re trying to achieve, build a network of trusted individuals who can help you carry out that plan, and then do it.

If you do that, scammers won’t have a chance to get in your way.

How to Avoid Capital Gains Tax When Selling a Business