The secrets of compound interest and overseas investing

Most of us aren’t strangers to the wonders of compound interest. Smart investors have been putting it to work for them for ages. There’s no reason that investors today cannot benefit from it as well.

Many of us can remember the time when some wise adult sat us down as a kid and asked us if we’d prefer a million dollars in one month or a penny doubled every day for 30 days.

Chances are, you probably requested the million before being told that the penny would be worth over five million by the end of the month; all thanks to the miracle of compound interest.

If no one ever showed you how it works, just take a look at this graph: 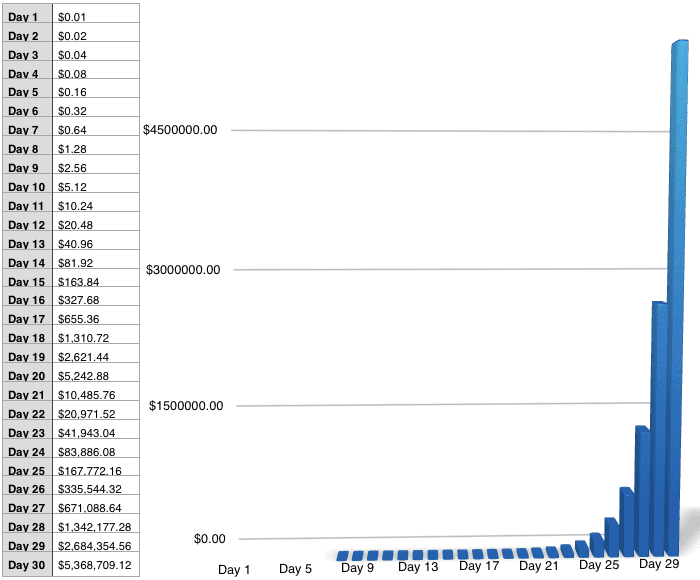 Though it starts off slow, compound interest is a powerful tool.

In the real world, investments that increase 100% on a daily basis don’t exist. However, even with much lower returns, you’ll still want compound interest working for you.

But that’s not the end of the story.

What I’m going to explain next is something that no one ever taught you — probably not even that wise adult with the story about pennies, and definitely not in school. (The stuff you learned in school almost never applies to the real world, anyway.)

Here’s secret #1: traditional investment routes will eat away the majority of your gains with fees.

Think of all the ways that you complain about how you’re losing money on your investments. Just the other day, John Oliver talked about retirement accounts that earn a 7% return. He pointed out that a typical retirement investment fund will charge you 2% in fees for their services.

That may not sound like a whole lot, but over 50 years the difference between the original 7% and the actual 5% return after fees is a whopping 63%. A variation of just 2% can result in the loss of almost two-thirds of what you could have earned.

That’s news to most people.

As John Oliver points out, compound interest goes both ways; the fees add up too. If you don’t pay attention, you could lose more by “playing it safe” with traditional investment funds and active management than you ever realized.

But that’s not all.

Your greatest obstacle to high returns

Secret #2 is that — even if you were to get a Vanguard Index and pay minimal to no fees — investing in the western financial system entails another problem: Big Government.

For instance, mutual funds or gold companies are held to certain standards. If you sign up for a mutual fund, they are obligated to give you an advanced warning when they change the fees.

The government doesn’t have to do that.

All the government has to do is say that they’re passing a law because they need more of your money to pay for Medicare. Just like that, they can put a new 5% tax on capital gains… on top of what’s there already.

And that can happen at any time.

That’s not to mention what existing taxes were already doing to your potential gains. If you take the “Double a Penny a Day” example and tac on a 30% capital gains tax per day, you’ll end up with just under $50,000 on day 30. Quite a difference from the five million plus you could have earned.

That’s taxes for you.

And, of course, governments aren’t going to stop there. Many politicians in certain countries are also talking about wealth taxes. The Netherlands already has one. Even at a quarter of a percent each year, it all adds up. Imagine a quarter of a percent of everything you own being taxed. It’s quite substantial.

Fortunately, the West is not the only place you can invest.

If you really want to take advantage of compound interest, looking overseas can benefit you in more ways than one. First, it will increase the potential return on your investments. Second, it will increase your scope so that that whole world is available to you.

When you invest overseas, it’s no longer a decision between buying in Chicago vs. Phoenix; now the whole world is there. You have access to more stocks and more mutual funds; even ones that Americans aren’t allowed to own in the US.

You also have access to more real estate options, some that can even get you a second residency or passport in return. You can also purchase gold that you can not only hold, but also borrow against, giving you access to liquidity at a very low interest rate. You can more easily sell your gold in an exchange in a foreign country, as well.

However you choose to invest, there is a better way to do it overseas.

You’ve been taught certain things about how to invest and that’s probably taking a bigger chunk out of your returns than any fee ever would. Once you allow yourself access to the whole world, the difference in returns can be enormous.

To illustrate, let’s suppose you have a quarter of a million dollars that you plan to invest. You could invest it somewhere in the West for a 5% return, but you choose to go overseas. You apply some of the strategies we discuss here so you get a 12% return. After overseas taxes (which, undoubtedly, are lower than anything you’d see in the West) you have a net return of 10%.

What will be the difference after 20 years between 5% at home versus 10% overseas? According to our calculations, almost a million dollars! 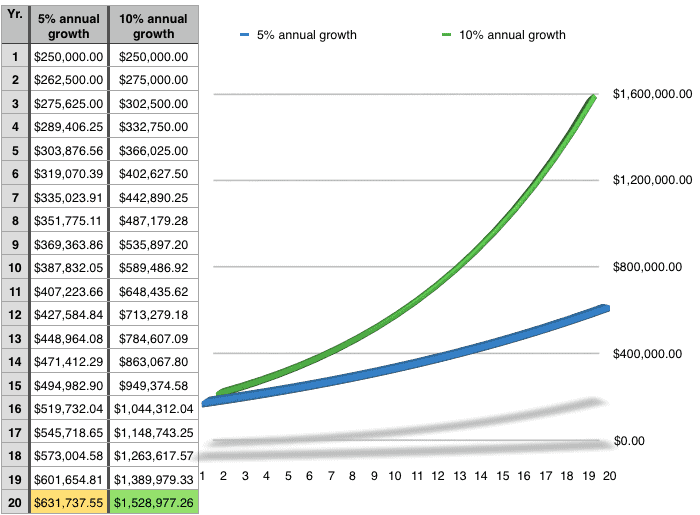 In just 20 years, the higher returns from going overseas can generate almost a million dollars more.

People worry too often about the challenges or risks to investing overseas without ever realizing what they are losing by staying put. Whether it’s expensive fees eating away at your retirement fund or taxes that severely limit your returns, investing in the West is anything but attractive.

Why not open yourself up to the world of possibilities that are already available across the globe? What would you do with the extra million from the example above?

The choice to invest overseas can have a real impact on your wealth and freedom. As with any investment, it’s better to start now than to delay. Once you understand the limitations to investing in the failing financial markets of the West, why stay?

If you are ready to take action and design your personal foreign investment plan, apply for a Strategy Call. I’ve been doing this stuff for years and now help people like you to create a life of freedom and prosperity. Let me know if you want my help.