How I was robbed at the grocery store… by Vietnam currency

A lot of people I talk to ask about the struggles of handling everyday tasks in a foreign land, where a foreign language is spoken.

How will the taxi drivers understand where I want to go? How will I get my laundry done? How will I shop at the grocery store?

For me, these tasks have become a relatively straightforward part of daily living. Despite the fear one may have about living overseas, that fear is really nothing more than being afraid of the unknown. While there are cultural differences around the world, places like grocery stores function basically the same.

Sure, the Vietnamese people may be more likely to also shop at local street markets, and they usually shop for groceries more often than you stuff the minivan in a Costco parking lot. But the experience isn’t that different once you get the short learning curve.

So far, my only shopping error has been not weighing and sticker-ing my own bananas.

Well, except for the fact that I was robbed at the grocery store. And the bandit was Vietnam itself.

Their take: about one cent. 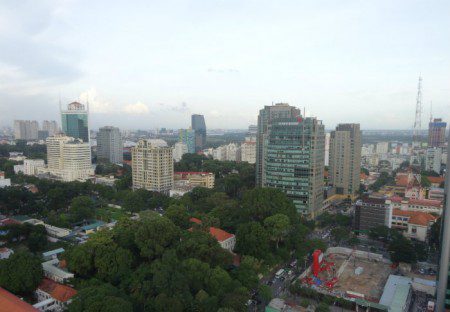 Ho Chi Minh City: Where a local grocery store had no choice but to screw me out of a penny due to the inflationary Vietnam currency

You see, those bananas I bought are sold by weight. When the cashier dispatched a store worker to do the weighing and sticker-ing, she returned with bananas priced out at 11,320 dong – about US$0.55.

I soon learned that I was lucky to even get the last 500 dong back. The smallest banknote denominations of Vietnam currency – 200 and 500 dong – are rather rare and more or less looked down upon.

With Vietnam currency being one of the world’s least valuable, pennies get lost in the shuffle. Or in this case, a few hundred dong. After all, what’s a few hundred units of currency between friends?

It hasn’t always been this way. I shared with you a few weeks ago how a friend of mine recounted her childhood piano lessons costing all of 500 dong less than 20 years ago. These days, I doubt any decent piano teacher would bother for less than 200,000 dong an hour – a 400 fold increase in a young person’s lifetime.

It was like they couldn’t keep up with the rapid devaluation of the Vietnam currency.

Things got so bad in the early 1990s that the bank had to start issuing Bearer Checks for use in business transactions. Rather than having business owners rolling around with wheelbarrows feel of cash, the State Bank essentially got into the traveler’s check business, issuing short-term notes for large transactions.

These days, prices have gotten so out of hand that it feels like the State Bank has essentially given up. The largest note here – 500,000 dong – is worth less than US$25. I saw a guy selling a relatively small piece of gold at one of the city’s many gold buying stalls the other day, and getting enough Vietnam currency in return that he could have used it as a bulletproof vest of sorts.

When I glance at every single banknote in my wallet and see Ho Chi Minh staring back at me, I wonder if this is the kind of thing he would have wanted: “the people” using a currency so inflationary that their government can’t keep up and prevent them from getting nicked on everyday transactions.

Ho joins sociopaths like the Sultan of Brunei who plasters his mug across every banknote and every coin in a constant reminder of his excellence.

Personally, I can live without the penny I contributed to Coopmart as a penalty for using a currency that doesn’t exist below 200 dong. Much more than I can live with bananas that never turned yellow. (Apparently, only the tiny bananas here are yellow.)

But it seems a bit odd that a socialist government “of the people” is screwing its people – far from the world’s richest – out of untold collective amounts of money like this every day.