Investing in Cambodia: as easy as getting washed away?

In most parts of the world, that might not be much of a statement. After all, 242 trillion gallons of rain are dropped on the planet in any given day, most of it here in the tropics.

I can’t say I was too upset about the rain. While looking for an umbrella in Ho Chi Minh City a few weeks ago, I came up – empty. I couldn’t find a single store selling a decent umbrella. Having had it with the cheap-o umbrellas that fall apart that first time someone blows out a candle near them, I stayed away from the tourist market and bought the only umbrella I could find… for $130.

Since that, it has barely rained for five minutes. Weeks of near-daily torrential downpours came to a halt once I forked over the Mastercard (they didn’t even take American Express).

Here in an early emerging nation, the rain means more than just getting to finally put one’s overpriced umbrella to use. Years of infrastructure neglect and good old-fashioned “we don’t have the money to fix that” mean the sewer system in Cambodia, among other things, isn’t up to developed world standards.

So while riding to an electronics store to purchase a new mobile phone, my tuk-tuk passed several streets that were flooded. Like, seriously flooded. This is life in Cambodia. When the rains come down hard enough, entire streets can’t drain the downpours fast enough.

Hey, at least it gives the local kids something to do, rather than play video games and gorge on potato chips like their western counterparts. 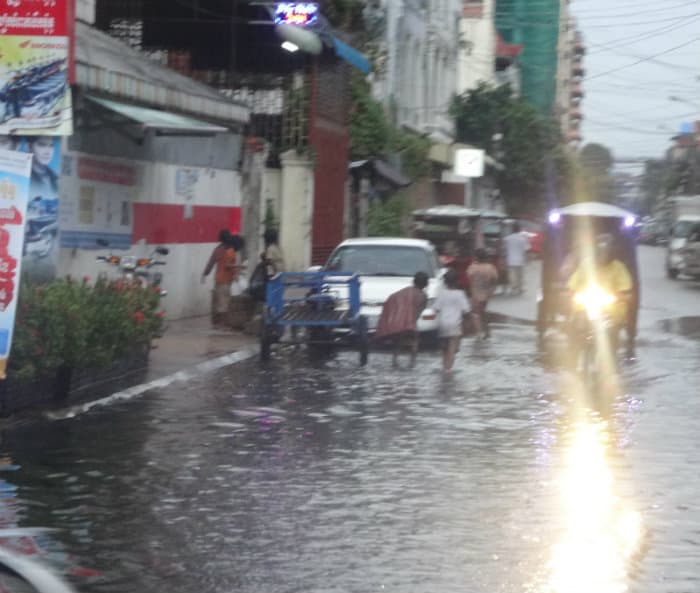 Investing in Cambodia: The internet is fast and there’s a very visible upper class, but streets flood in the afternoon rains.

The Japanese government has been helping Cambodia rebuild much of its infrastructure, through methods that include a $90 million loan to jumpstart such projects. Local Cambodians I’ve talked to wonder just how efficiently that money is being used, or if it can make a dent in the major projects that need to be completed.

Just yesterday, the English-language Phnom Penh Post declared that Phnom Penh roads needed widening and improvements in order to sustain the increasing volumes of traffic. More locals are moving from bicycles to motorbikes and motorbikes to the ubiquitous Land Rovers and Lexus SUVs (they plaster a huge “Lexus” decal across the side of the car), and that’s causing a strain on the roads.

That combined with more people seeking work in Phnom Penh and an extremely young population coming of age, and you can see that, like much of Southeast Asia, there will be large structural investments to be made.

Sometimes, I feel like a Carlton Sheets infomercial or an Amway salesman with how much I talk about ground-floor opportunity in countries like Cambodia. But when you have a country that has so many potential projects in the works, it’s hard not to start picking out ways to make money.

This is the kind of place where you can make real returns on your money – two-, three-, even ten-fold returns if you play your cards right. Cambodians can earn halfway decent interest rates on their money by holding their local currency the riel, and they can earn higher returns through a crazy gold arbitrage scheme I discovered yesterday.

People aren’t investing in Cambodia because they’re trying to beat the 0.76% their cash is earning in the bank. They invest here because they want to hit a home run and tap into a growing base of consumers that never existed before.

Phnom Penh, and Cambodia as a whole, still isn’t a large country, and general entrepreneurial pursuits like starting a restaurant are certainly more competitive and challenging. In general, however, a rising tide raises all boats, and I still believe the twenty-first century will be dominated by Asia.

That means Cambodia will be getting its act together out of necessity, to take part in the action that’s already underway in neighboring Thailand and Vietnam, and further afield. If you can help innovate and increase efficiency in some of the most basic parts of everyday business, you may well be handsomely rewarded here.