There’s a notion in the western world that “transparency” – a word largely co-opted by western governments to prove their superiority to the rest of the world – is the best way for a government to operate.

In reality, the idea that government is “transparent” just means there’s no layer of opacity to their screwing you.

Governments like those in United States love to point the finger at developing nations like Vietnam and say how “corrupt” they are. In reality, that logic is such broad brush stereotyping that they might as well use it to re-paint the front of the White House with an eyeliner brush.

Do you really believe a US congressman can’t be bought off with campaign contributions? Somehow, because well-connected businesses, mafioso figures, and shady real estate developers happen to kick money into a re-election campaign rather than into a politicians’ sock drawer for gambling money, it’s so much more “transparent”.

The fact that the police in the US hand out $400 tickets for jaywalking in residential neighborhoods rather than heckle you for the rare $5 is so much more “fair”.

In the western world, Soviet-style gestapo forces, government spy agencies, and the increasingly militarized police can harass you because they feel like it – and leave you with no recourse.

Thanks to their incredible “transparency”, you have no real ability to fight their system. Do you ever know someone who beat a traffic ticket? It’s impossible.

On the other end of the spectrum, did anyone really expect Bradley Manning would get a fair trial? You can’t fight the government and win, whether it’s city hall… or the US military.

The ideal that everyone gets a fair trial and no one has special privileges is the foundation the western world is supposed to be built on. But it’s a load of crap. The ruling class in government will ALWAYS find a way to build in advantages for themselves.

That’s why a congressman like Charlie Rangel can “forget” to pay taxes for decades and get a slap on the wrist. Same goes for tax cheat Tim Geithner; you know, the guy that oversaw the TAX CODE.

Yet see just how well the IRS treats you if you miss a return. Heck, I recently told you how the IRS screwed taxpayers AFTER they came forward and declared their offshore bank accounts.

This is what passes for “transparency” in The Land of the Free.

For as “transparent” as the US claims to be, it barely ranks in the top 20 on Transparency International’s Corruption Perception index. That puts it squarely between Barbados and Uruguay. 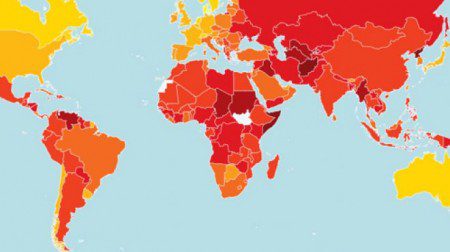 The Land of the Transparent?: The US earned the equivalent of a “C-” on Transparency International’s 2012 corruption index

Yet boy do US politicians love to shove their “transparency” down the rest of the world’s throat. US companies are expressly forbidden by law to offer bribes when operating overseas. They can’t “tip” government officials, “throw a bone” to a local contractor, or slide an envelope across the table in a business meeting.

That puts American companies at a distinct disadvantage in emerging markets like China, India, and here in Vietnam.

While the United States dictating its own warped version of morality to the rest of the world is hardly a novelty, it’s all the more insulting considering that the US isn’t exactly a choir boy in this arena.

Let’s put all the western government propaganda against “corruption” aside for a moment. Just how bad is this lack of transparency in the emerging world?

Here in Vietnam, for example, some western business owners complain about little bribes they have to pay to keep their storefront opened. One I’ve heard of is paying the woman who collects the garbage. Whenever a new store opens, this woman approaches the owner and says, ever so politely I hear, that she needs a small tip to make sure the garbage gets picked up.

The “tip” demanded is usually around 50,000 Vietnam dong – less than US$2.50. Pay it and you’ll be garbage problem-free. Cheap out and your garbage may pile up, or you just might find yourself charged for a few extra kilograms here and there.

To the transparency crowd, this kind of behavior is an outrage. How dare someone demand money under the table – tax-free, no less – just to do their job?

While on the surface it may seem sketchy, things aren’t always what they seem. In reality, business owners have endless ways to dodge taxes here. Not paying is a sport in Vietnam and many other developing countries. Enforcement is much more lax than in the bankrupt west.

And those taxes and fees include paying the woman who collects the garbage. So rather than the government hiring a bunch of garbage tax gestapo to track the business owner down, levy his bank accounts, and shut down his shop, they’ve outsourced the task to the free market.

Pay the garbage lady and you’ll get great service. She is the proxy that removes Big Government from the equation. She earns a little bit more than she would on the government payroll, kicks back a few shekels to the government for the privilege, and everyone is happy.

That’s voluntary association at work. You could simply not pay and haul your own garbage away. Unlike in the US where the EPA will administratively bankrupt a business because a single Oklahoma bush squirrel is nesting underneath it, Vietnam doesn’t work that way.

Would you rather be accountable to a woman from the neighborhood who sorts your trash, or to some faceless bureaucracy that forces you to pay them at gunpoint?

Anytime I can a gun away from my head for two bucks, I’m in.

The system is similar on city buses. Fare collectors pay a monthly fee to the government that owns the bus in exchange for the right to pocket whatever fares they earn on their shift. I’ll bet they’re not kicking fare-paying pregnant women off buses here.

I’m not saying political corruption is a good thing. But at least it’s honest. Corruption acknowledges a basic human greed that exists in all of us, as opposed to western governments which get on a high horse and pretend their system of force and intimidation is better than a series of small, negotiable bribes.

And I tend to favor honesty over being treated like a child.

Obligations of US Citizens: 7 Requirements for Being American