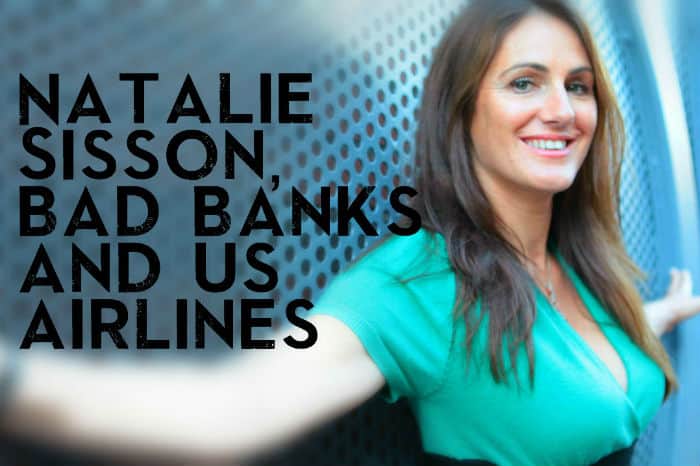 Andrew interviews Natalie Sisson, the “Suitcase Entrepreneur” about life as a female business owner, living in Thailand, and whether guys only move to Southeast Asia for easy sex. Plus, he rants about the G20’s new bank bail-out plan for “Too Big to Fail”, horrible US airlines, and an entrepreneurial success story.

Discussed on this show:

[2:02] Andrew explains why today’s show may really ruffle some feathers just as Stephanie Murphy did two weeks ago.

[2:23] The world leader criminals are at the G20 in Melbourne, and buskers are losing money because of it even after presidents spend thousands of dollars a night on hotels.

[3:17] The new version of “Too Big to Fail” in an era of big debt, big deficits, and quantitative easing.

[3:35] Is Janet Yellen a “half man, half woman” Bond villain? Or is she repeating the Nazi counterfeiting scheme from World War II?

[4:44] You’re on your own if your insolvent bank goes under. Get ready for the Cyprus bail-in playbook and being an unsecured creditor when your bank fails. And don’t think the FDIC will save you.

[7:37] What role will deposit insurance limits in dollars or euros play in any bail-in? If you have more than this limit, get ready to be screwed. And no one will care.

[8:36] Your bank account isn’t really money if it is only an unsecured liability on a bank’s balance sheet.

[9:35] How the New York Times and the mainstream media are ginning up anger against the ultra-rich by writing about those buying helicopters and Bentleys. To these people, a Mexican restaurant owner having money confiscated isn’t much different from the guy in a private jet.

[13:01] The government’s next step: criminalizing gold. Isis is unveiling their own “real money” in the form of gold and silver coins. Andrew suggests the government could ban gold by saying it is the “money of terrorists”.

[14:13] Why you should store gold in Singapore. (Buy your offshore gold at www.nomadgold.com and help keep our pirate ship afloat.)

[14:59] No reason to be in the west anymore for banking… or flying. Andrew talks about the frequent flier website FlyerTalk.

[15:33] How the US government and Dodd-Frank shut down easy ways to earn frequent flier miles on debit cards. It’s all thanks to crony capitalism.

[16:05] It is getting nearly impossible to earn frequent flier miles in the United States. Until now, the US was the best place to earn miles on airlines like United, Delta, and even American. But these bad airlines are now making earning miles impossible.

[17:55] US airline flight attendants are fat and grumpy and represent everything that is happening in the western world. Andrew says it’s a great reason to fly Emirates, Qatar, Singapore Airlines, and other non-US carriers. This is the last straw.

[21:54] Natalie Sisson talks about her life as the Suitcase Entrepreneur and the success of her book.

[23:40] Is Australia headed down the tubes? All about government propaganda.

[26:10] Natalie takes a swipe at “fly by night” location independent entrepreneurs who are ripping off the public. She says “smart business” isn’t online or offline, but just business.

[29:05] Should you live as an expat entrepreneur in Bangkok or Ho Chi Minh City forever? Or should you strive for more than $1 street food meals? Natalie says those stuck in Southeast Asia suffer from “Peter Pan Syndrome”.

[30:01] Why to avoid living in Vancouver when you start a business… but keep traveling and “put your big girl panties on”. Why networking is important.

[32:55] Do men in Southeast Asia only live there for easy sex? Natalie says some guys only want to live a “rock star lifestyle”.

[36:25] Internet businesses women are starting, and how they differ from men.

[37:55] Finding personal challenges like dragon boating across the English channel or biking across Africa. How to keep from being boring and extend yourself.

[40:09] Did Tim Ferriss scam a loophole to become a world record holder? Why “rules suck”.

[41:31] Is Natalie Sisson married? Will she ever settle down?

[42:33] Would Natalie turn down a potential suitor if he insisted on living in New Zealand and paying a lot of taxes?

[43:44] Andrew talks about his new love of tea – from white tea to green tea and beyond – and an entrepreneurial lesson he learned from shopping at TWG Tea.

[44:10] Andrew’s interview on Entrepreneur on Fire.