Is a surveillance state traitor still a traitor? (And why he needs a second passport)

Edward Snowden is now on the run. He had been planning his escape for some time, and after exposing the massive extent of the US surveillance state, he has now disappeared. It was suggested that he may be using another passport, but I couldn’t find any evidence he has a second passport.

His initial escape to Hong Kong was probably ill-advised. No matter how much I love Hong Kong, and how much I think the Chinese government wants to stick it to Uncle Sam, I don’t think this will be their moment to stand up. Perhaps Snowden should have read my article on the best non-extradition countries to escape to. Despite running a crazy regime, places like Venezuela rarely extradite Americans. It only goes to show that for all the “freedoms” you think you have in the western world, it ultimately comes down to how much freedom the government you’re under is willing to give you.

Ultimately, when guys like Edward Snowden “go rogue”, the government reacts swiftly. To them, it’s about punishing anyone who doesn’t goose step right along with them. In this case, it’s highly likely Snowden’s passport will be cancelled by the State Department, leaving him with far fewer options. That’s why having a second passport is so important. 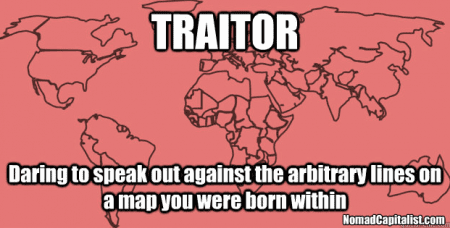 You may not be planning to leak top-secret documents, but who knows what they’ll criminalize next? Did you think – even a few years ago – that the government would be spying on you?

Governments operate with a faux sense of authority over whistleblowers (and everybody else). They say those like Edward Snowden “violated their contracts” or broke the law. But if it was up to the government, we might still have any number of formerly “normal” atrocities. It took people breaking the law to stand up for what was right.

I seem to recall some historical figures who used phrases like “only following orders” to pretend they were on the right side of moral law. You might know them as the guys responsible for one of the greatest acts of democide in history.

Indeed, during the Nuremberg Trials, the US government rushed to enact Nuremberg Principle IV, which tossed out “following orders” as a defense. Once the shoe is on the other foot, however, they take a different tone. In the mind of the government, it is perfectly within its rights to spy on its citizens and use drones to kill people they don’t even know, and it’s not fascism or terrorism. It’s their birthright. Because if there’s one thing the US government knows how to do well, it’s pretend they’re a shining example of perfect morals 100% of the time.

Never mind that anyone who claimed the government spies on its citizens or had a murderous drone program was a conspiracy theorist.

While many people – including most of my readers – believe Edward Snowden’s fight against the growing surveillance state to be noble, the government still has plenty of sheep doing its bidding. The idea that we’ll trade freedom for security is a dangerous proposition but one many “patriots” are all too willing to do in the name of maintaining “American exceptionalism“.

Then again, George W. Bush won re-election promising he’d keep you safe. All you had to do was take off your clothes for some guy who a year ago was getting your burger order wrong.

Here’s a sampling of the comments I found from Joe Citizen while researching this story:

He is a traitor and should be shot, or put in prison for the rest of his life, and they should put Jane Fonda in with him.

He is no longer a citizen of MY country. He is a Traitor to my country and a traitor to his family. How are we supposed to defend ourselves against terrorists when our own citizens reveal top secret information to the world? Extradite him, give him a military trial and hang him. We do not live in a friendly world. Wake Up America. There are people out there who would rather kill every last one of us than live a peaceful life. We don’t need some 29 yr old idealist destroying our ability to defend ourselves in the name of privacy. Defense of this traitor is in itself treason.

I cannot believe the amount of comments that actually support a traitor to our country. If you people don’t like the safety and security we enjoy in America, why don’t you go to some other country like the TRAITOR did and see how you like it there?

I for one have packed my bags. I get far more pleasure spending time outside of the USSA than I do spending time in it. And for whatever reason you’re here, either you do, too, or you’re considering doing so in the future.

It’s nice to see those with the emotional skills of five-year olds are still capable of giving knee-jerk reactions in favor of a Government with No Clothes. The whiny reactions of those telling us “if you don’t like it, move to Somalia!” will continue until the empire collapses under its own weight.

After all, these are the same people who sneer at Snowden’s escape to “China” because China doesn’t have any freedoms. Have any of them been to China, as I have many times? Of course not. You could cut the irony with a knife.

But hey, maybe they’re the people who have “have nothing to hide”.

To those who suggest we all ought to “stay and fight“, this is your moment. Fighting involves consequences. It involves breaking the law. It involves conviction. Edward Snowden has done all of those things and has stood up to a tyrannical government to draw a line in the sand.

It’s too bad the self-styled “patriots” who claim they’ll fight to the death for the no-longer-free Land of the Free want to try him for treason. If you’re banking on a revolution to save your freedoms, I can enjoy the decline, because if this doesn’t wipe the remaining veneer of the United States’ silly claims of freedom, I don’t know what does.

I’ll be in Hong Kong away from a government that follows those who challenge it to the ends of the earth, glass of Jameson’s in hand, praying for Edward Snowden.