Here at Nomad Capitalist, we are about going where you are treated best, which includes legally finding ways to avoid paying taxes that discourage smart investments and disrespect your capital.

We travel the world looking for places that are putting out the welcome mat for foreign investment, making it easy to grow your life and your wealth and keep more of your own money.

The idea behind capital gains tax — that is, taxing a profit made from the sale of real property or financial holdings like stocks and bonds — is a major consideration when choosing where to invest and how to maximize your strategy overseas.

Paying capital gains tax is not only a pain, but it also discourages investment and stops capital from reaching its highest use. We have talked before about the countries with the highest capital gains tax rates, but we know that savvy investors will also want to know where they can invest in jurisdictions that better respect capital.

Around the world, there are dozens of countries that impose no taxes on capital gains in one way or another. The list includes the usual suspects like Barbados and tax havens like the Isle of Man, as well as more surprising countries like Iran and Egypt (although the Arab Spring-inspired calls for a new tax on investments).

In this list, we focus on countries that are friendly to expats that offer a high quality of life. For an investor looking to hold stocks and other investments in their own name, rather than an offshore corporation, these countries offer no capital gains taxes and also may provide key bases for your Nomad lifestyle plan. 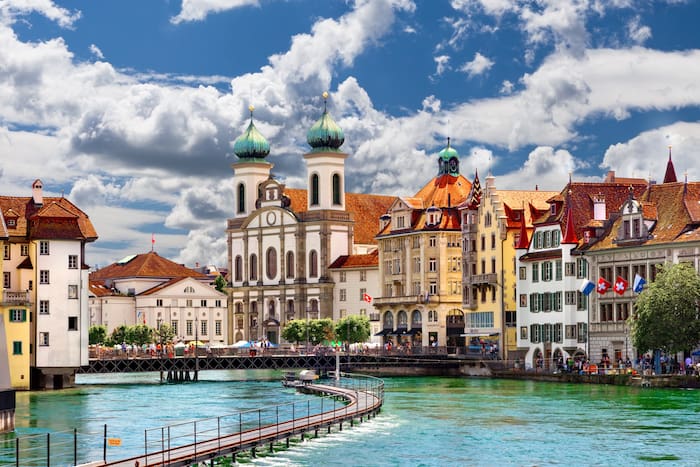 You don’t just go to Switzerland for the cheese and high-quality watches. Thanks to its progressive taxes, owning property here is more affordable than one might believe.

Switzerland (one of the world’s renowned centers of banking and stores of wealth) makes the list with no capital gains tax on trades of securities. Gains from selling private property are not federally taxable while gains from business properties are taxed as income. Cantonal and municipal taxes are imposed on both types of property.

Switzerland taxes capital gains on other investments and stocks if you are trading for a living, but otherwise, there are no capital gains. Plus, foreigners may be able to avail themselves of a flat tax scheme that could reduce their capital gains tax even if they do trade for a living.

With Switzerland’s progressive tax rates, the longer a property is owned, the lower the tax. Canton-level rules apply for immovable property, with the tax burden ranging from 25% to 50%.

After four to five years of ownership, a maximum relief of 50% to 70% of payable tax is allowed. Short-term gains may be imposed of up to 50% for properties sold within the first four or five years. 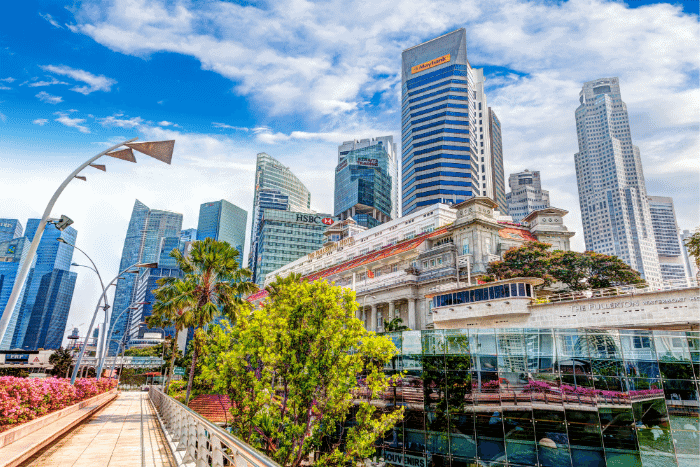 Singapore once again joins the list of nations offering competitive incentives for entrepreneurs and capital.

The city-state as a whole has been renowned for making itself attractive for foreign capital to flow into its small jurisdiction and be given a strong basis for banking security, as well as tax incentives.

Thus, there is no capital gains tax in Singapore. While certain elements of financial policy have gotten tighter for expats and newcomers to the country, Singapore still remains a solid choice for English-speaking low-tax nations. 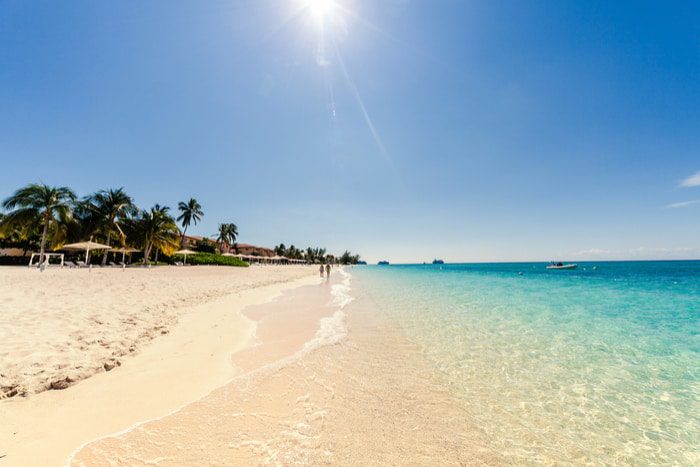 The fact that the Cayman Islands made it to this list is hardly a surprise – with its high standard of living, the possibility to live in the Caribbean, and no capital gains tax, how could we miss it?

The Cayman Islands is a well-known tax haven and overseas banking hub, and as one might expect from this pro-growth jurisdiction, there are no capital gains taxes charged on any transaction here.

Cayman Islands entities may be taxed by other jurisdictions, but the British overseas territory will not impose an additional tax burden on your capital gains itself.

This English-speaking island nation offers a high quality of life for foreign investors as well as the perks of living in the Caribbean with a great business environment and solid tourism infrastructure. 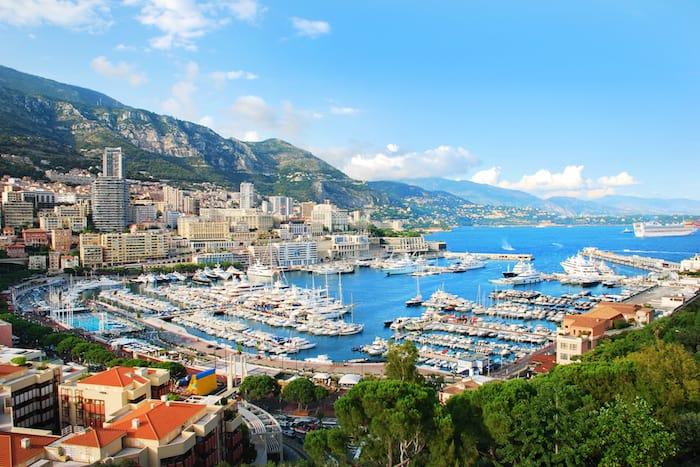 Monaco is the epitome of wealth. The creme de la creme come to live and invest here, plus you won’t be burdened with capital gains tax. Unless you’re French. If you’re French, you pay!

Monaco is among the most well-known tax havens and a magnet for the ultra-wealthy. The small nation imposes no capital gains taxes, except for French citizens.

Monaco understands the benefits of making a tax and business environment that is attractive to foreign wealth and thus respects capital gains generally with no taxation.

The micro-country offers many paths to residency and may be a useful part of your capital gains strategy if you are a high-achieving entrepreneur looking to elevate your investments. 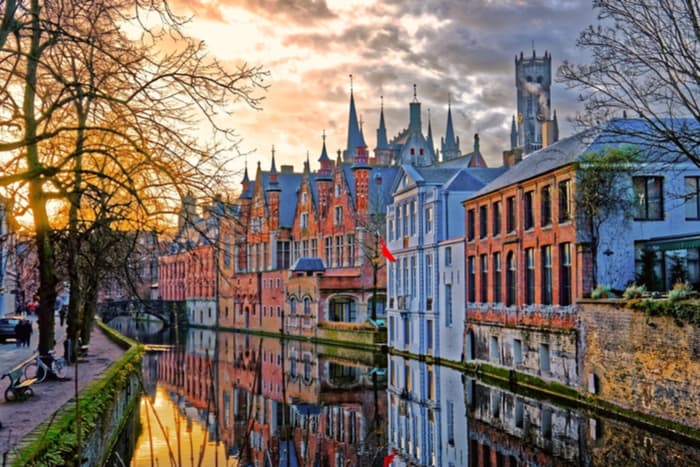 Belgium has quite a demanding tax system, but no capital gains tax. Bear in mind that even if you don’t pay that tax, there might be another one coming on a different basis, so know what you’re getting into.

Bernard Arnault, the billionaire head of luxury giant LVMH, also moved from France to Belgium for “family inheritance reasons”, but most surmised it was to avoid a new “super tax” imposed by French socialists.

Capital gains in Belgium are not 100% tax-free. The deciding factor on whether capital gains are taxable is whether they are realized privately or can be contributed to business or professional activity.

Generally, if capital gains can be considered part of the normal private management of personal assets, they are not taxed. However, “normal” is largely subjective and often determined by case law on an individual basis.

If, for instance, you sell your shares shortly after acquiring them or there is a large difference between the purchase and sales price, your activity may constitute speculative intention and subject you to a 33% capital gains tax.

Capital gains realized by a company are subject to the normal corporate tax rate of 25%. Other capital gains that involve “substantial participation” will be taxed at a rate of 16.5%.

There are also special rules that apply to mergers and splits, the losses and shares of trading companies, and capital gains derived from IP, embedded royalties, and infringement compensation.

There are many caveats and exceptions, but generally, all private capital gains on shares are exempt from tax except for fixed income securities.

Finally, if you benefit from the expatriate special income tax regime, the rules only apply to Belgian-source capital gains.

Belgium isn’t exactly a low-tax country, even as far as Europe goes, but it’s zero capital gains rate in most cases is one of the best in Europe. The Netherlands also does not tax investment returns, but it does impose a sort of wealth tax on investments. 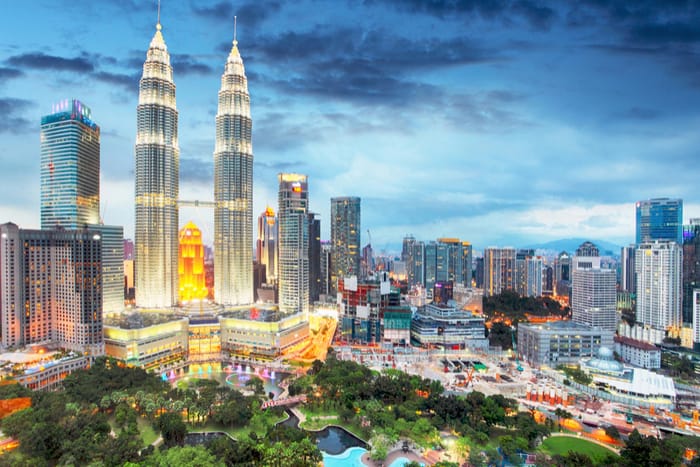 Malaysia has a territorial tax system, which is great news for all expats out there. However, you have to own a property for five years or longer if you don’t want to face real property gains tax.

Like its neighbor Singapore to the south, Malaysia does not tax capital gains on equities. Malaysia also abolished its capital gains tax on real estate back in 2007.

Additionally, Malaysia uses a territorial tax system rather than a residential tax system, meaning non-Malaysia source income is not taxable; this includes investment income generated offshore, even – in many cases – if it is remitted to Malaysia.

The Malaysian government has imposed a sort of de facto capital gains assessment on real estate, requiring non-residents to hold properties for at least five years or face a 30% withholding on gains under what is called a “real property gains tax.” The measure was designed to cool flipping transactions in the hot Kuala Lumpur and Johor Bahru markets.

New Zealand isn’t called heaven on Earth just because of its stunning nature and scenery. It has one of the very few truly free economies on the planet and you can forget about capital gains taxes here.

One of only six “free” economies in the world according to the Heritage Foundation (the United States is not one of them), New Zealand offers stability and independence and is a growing “safe haven” jurisdiction for assets.

New Zealand does not impose a capital gains tax on the sale of equities or other investments. It does have a formal law stating that real estate purchased for the express purpose of resale can be made subject to capital gains taxes, however, this law is rarely enforced.

The Labour Party proposed a fresh tax on capital gains several years ago, only to see their worst election returns in years. 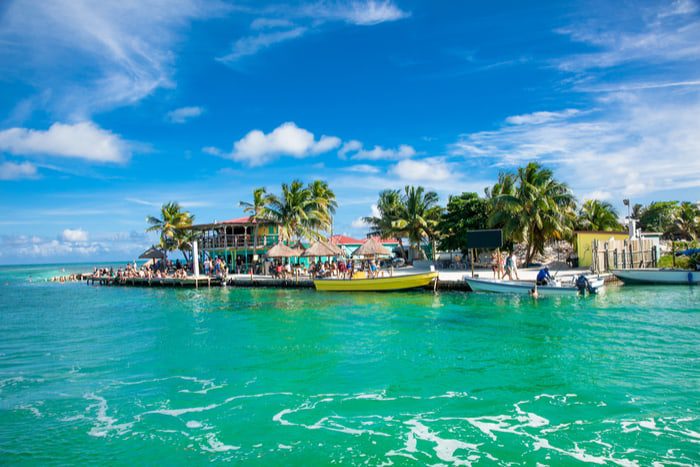 We’ll be seeing more mention of Belize as they take the race for getting more second-residency-seeking expats more seriously.

Located not so far from the tourist-filled beaches of Cancun and the Yucatan Peninsula, Belize has been an expat-friendly haven for decades. Formerly known as British Honduras, the country has made itself one of the more attractive places for expats with cash.

Considering Belize is a small, independent, English-speaking country, it’s no surprise so many expats would flock there.

The country is also considering making it easier to apply to its Qualified Resident Program in hopes of competing with second residency options in other Central American countries.

The fact that Belize boasts zero capital gains taxes for residents or non-residents alike doesn’t hurt its appeal, either. 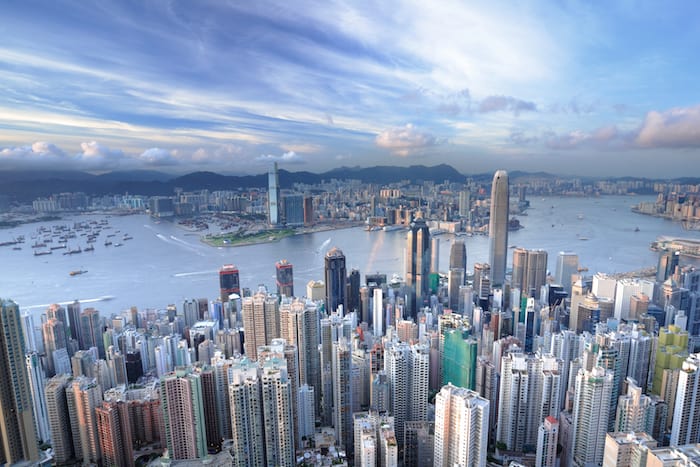 There’s no place like Hong Kong. The hub of investors, bankers, and expats alike, the freest economy in the world definitely doesn’t impose capital gains tax.

The freest economy in the world for years now, Hong Kong is one of the best places on earth for investors. And the Special Administrative Region of China is a bastion of expats, with bankers and professionals from all over the world.

Go to any view bar on a Wednesday night and you’re more likely to run into someone from Long Island than Hainan Island. As part of its tradition of respect for capital, Hong Kong does not tax capital gains.

The exceptions are shares issued to employees as part of a pay package; these are taxed at the city’s flat income tax rate.

The potential issue with this is expats who leave before receiving all proceeds from their shares will likely owe tax in two countries, as Hong Kong has few dual taxation treaties. Unrestricted shares and options are, however, free from capital gains taxes.

The goal with this list is to get a bird’s eye view of where around the world — in many different kinds of countries — you might choose to invest your efforts to avoid paying unnecessary tax on capital gains.

We believe strongly that opportunity comes in many forms. Countries that may surprise you appear on this list — offering incentives for high-achieving entrepreneurs like you who want to be smart in internationalizing.

We have not covered every country. For instance, all Crown Dependencies and most British Overseas Territories (CDOTs) do not apply a capital gains tax either. However, Brexit throws some uncertainty into the mix about the future of those systems.

The point is that these places exist because they want your business and your money and they are willing to create attractive tax incentives to get that. All that is left for you to do is to determine which jurisdiction(s) works best as part of your personal offshore strategy.

If you want to learn more about building your nomad strategy, reach out to our team today.