I learned an important lesson when I was twenty-one years old.

My radio business had just begun to take off, and like most wide-eyed young entrepreneurs, I wanted more. There I was, sitting in my loft apartment slinging phone calls to prospective clients. I had just stopped stuffing my own direct mail envelopes and outsourced the task to a mail house.

But to me, it all felt fake. The growing revenues of my young company didn’t seem… “real”. After all, what good was it sitting in an apartment when I could have an office?

Even better, why was I farming myself out as a consultant when I could own my own radio station?

Shortly thereafter, I got my chance. A client of mine had taken a liking to me and introduced me to a venture capitalist friend of his. My client told his friend that I was a rising young entrepreneur with visions of owning his own AM radio station in Phoenix. All it would take was about $3 million.

The day the venture capitalist told me my deal sucked turned out to be the best days of my life. Because it taught me an important lesson:

Here I was running a location independent business, and yet I wanted to be tied down to Phoenix, Arizona. If had gone that route, I wouldn’t have ended up with the Fortune 100 company or the billionaire or the huge direct response company who eventually became my exclusive clients.

And as I continued to work in and observe the radio industry, I saw guys committing an even bigger sin: they bought the real estate that their tower site sat on. Talk about non-core assets.

I shared with you recently that I love the Petronas Towers here in Kuala Lumpur. Always have.

Kuala Lumpur’s goal of becoming a world-class city was accomplished fifteen years ago when this city of barely two million was thrust into a new class thanks to what were then the world’s tallest buildings.

Even today, aspiring financial centers across Asia and Africa are plotting their own skyscrapers in an attempt to position themselves as serious cities in the new world economy.

But I have to ask myself, just what end user is footing the bill for these ambitious real estate projects?

The last time I was in Kuala Lumpur, I read that Petronas, Malaysia’s state-owned oil and gas company, was taking over all of the floors it didn’t already have under lease in Petronas Towers 1 and 2. All non-Petronas tenants with space in the main towers would be relocated to the less impressive Tower 3 next door.

While mega-tenants like Petronas score points for not actually owning the cantivelerating assets they occupy, I have to wonder just how much space one company can possibly need. 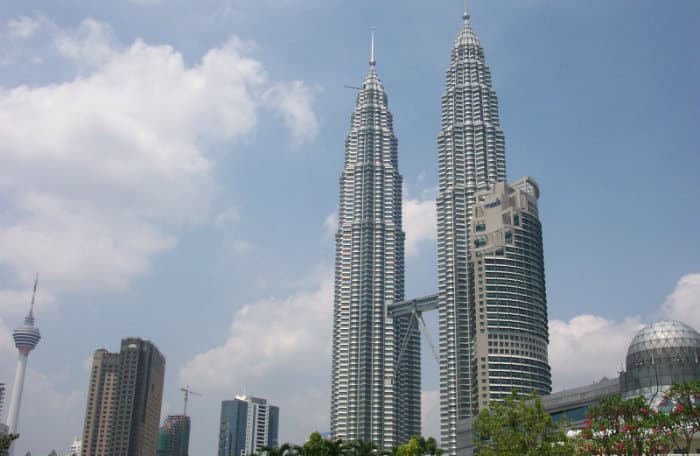 Petronas Towers: How much space does one oil company need in one city… and just what do 176 floors of people do in that commercial real estate?

With 10.7 million square feet, the Petronas Towers are rather roomy. 176 floors of ultra-premium office space seems like a lot for people… um, what do all of those people do?

I’ve always wondered just what the people who fill such towers actually do besides shuffle papers.

I suppose Petronas can afford to overpay for Class A+ office space. They are, after all, owned by a government that is actually hitting its growth forecasts.

In the same way I’m bullish on well-managed casino operations like Wynn, who use luxury to attract the best customers, I realize there will be a limited market for Class A+ office space. Big brokerage houses still need impressive space to swindle – er, advise – their high-net worth clients on their investments.

Beyond the highest-end office space, however, I see serious flaws in commercial real estate – even in emerging markets.

Consider that, for the first time ever, many American companies are projected to allocate fewer than 100 square feet per employee by the end of the decade. By 2017, the average will have dropped 35% to 150 square feet. While small space has long been the norm in Europe, the trend is rapidly headed to other parts of the world, including the United States.

Globally, the world in general is headed in a more capitalistic direction. That means emerging world governments are shedding state-run assets faster than their old world counterparts are socializing them. That trend alone should lead to greater efficiencies and, over time, reduced head count among some of the world’s largest companies.

Can you show me one specific region where Shell or Exxon control 176 floors of prime real estate, all in one city?

Beyond that, just look at the momentum of virtual office space in the emerging world.

In the United States, the virtual office space market is largely controlled by Regus and their abyssmal service.

In the emerging world, there are dozens of players fighting each other for share. Startups are in a race to deploy more locations faster than their competitors. And, despite all of this competition, prices aren’t as soft as you might expect. It can be cheaper to get a virtual office in New York than in Hong Kong.

Just who is filling all of that high-end, yet extremely densely “populated” office space? Companies that used to rent their own office space. And they weren’t renting at prestigious addresses, meaning it’s Class B and C space which will be especially hurt. I can make the case for playing the middle market in emerging consumer markets, but not in commercial.

While I’m a huge believer in the startup scene in emerging markets and frontier markets, I believe we’ll see smaller, more lean startups that use services like virtual offices, people working from their home, etc.

Just a few months ago, I sat in at a new company based in Ho Chi Minh City where the owner rented a large apartment to make room for his staff of six people to work from. The several hundred dollars it cost each month paled in comparison to an office.

Nimble is the new black in startups, and wasting money on big, stuffy office space is something I think you’ll see go by the wayside. Especially when you consider what I call “entrepreneurs of necessity” in countries like India have bootstrapped their way to success from their living room, and won’t be keen to splash out big money on office space.

Sure, we’ve seen plenty of technological innovation in recent years, and people are still renting office space. However, I believe as more and more people work as independent consultants and even jet setting entrepreneurs, you’ll see a serious crimp in commercial real estate. The days of endlessly building in anticipation of new business will come to an end.

Such lateral moves are why I’m short on commercial real estate in the long-term.

If you’re a sovereign wealth fund or a Qatari sheik, perhaps you could justify picking up the last 127-story Class A+ building. There will be some sucker willing to pay the rent. I shutter to think how bad some of the Sub-A buildings will perform, though.