Lessons learned from the world’s most libertarian university

The past few days I had the pleasure of being on the campus of Universidad Francisco Marroquin in Guatemala, and it was unlike any university I have ever visited.

The university was founded in 1971 by Manuel Ayau, who was responsible for pushing changes to the Guatemalan constitution to alter the nature of academic accreditation in the country.

As a result, Guatemala has one of the most autonomous higher educational systems in the world.

Once recognized as a university, under the country’s constitution an institution possesses the power of automatic accreditation for any degree program it creates, meaning the state has little to no control over the development of academic programs.

This has empowered UFM to be one of the most innovative universities in all of Latin America, and from my conversations with students, faculty, and administrators during my visit, it seems the best days are still to come.

Ayau, known to all as “Muso,” was also responsible for pushing a constitutional prohibition against the monetization of the national debt by the central bank.

College of choice for aspiring entrepreneurs

Guatemala enjoys an extremely stable currency as one of the few countries in the world where the government is handcuffed from using inflation to skyrocket spending and buy elections.

Recent attempts to change both of these provisions have failed, and the Constitutional Court has upheld the University’s constitutionally guaranteed non-taxpaying status in spite of aggressive persecution by the nation’s tax authorities.

This heroism in the cause of liberty would be enough to make UFM a great place for entrepreneurs from all over the world to send their kids to college, or for young aspiring entrepreneurs to consider attending if they still want a university credential.

But there are even more reasons it should be on your radar if you or somebody you know is looking for a breath of fresh air in a slightly more traditional academic environment.

Things to love about UFM

1. The campus is gorgeous

The UFM campus is idyllic. Trees, flower gardens, ponds, and fountains consume the environment to the point you might even forget you are not in a protected national park somewhere.

The architecture of the buildings is designed to blend in to nature rather than usurp it, and you can feel it in whatever room you are in, or whatever park you pass through.

There’s no doubt that this is one of the key ingredients to the love the students and faculty have for their university, a pride not rooted in tribalism, but in the fact that they have something beautiful and are grateful for it. 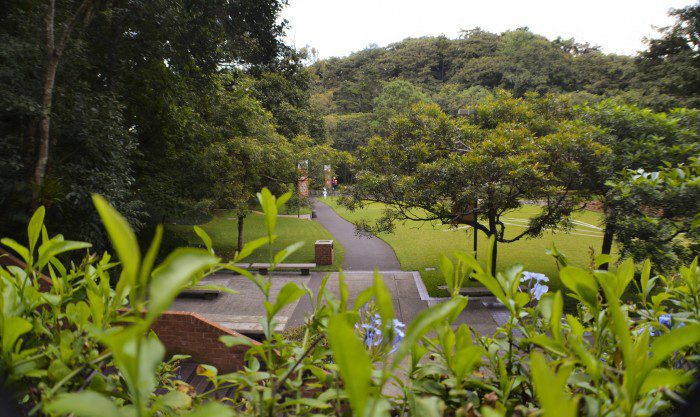 The UFM campus is built into the surrounding landscape. Every view is beautiful, no matter where you are on the grounds. Source, UFM Flickr

Everybody on campus was warm and friendly, from those with whom we had an introduction to complete strangers. I’m not sure I’ve ever seen so many people at a university with smiles on their faces.

Rather than the stress and anxiety familiar to anybody who has attended a university in the US or Europe, the attitudes of the students could best be characterized by wonder and curiosity. They are there to learn, and they are interested in what they are learning.

If you only speak English, you will feel just as much at home. I’ve lived in Latin America for nearly 7 years now, and I’ve never been in a place where not only does everybody speak English, but it’s almost impossible to hear an accent.

The Guatemalans also speak a slow, clear, and deliberate dialect of Spanish, which is much easier to understand than in many places in the region. If you want an easy immersion into a Spanish-speaking country, the friendly bilingual environment of UFM is a fantastic option.

As if UFM weren’t free market, alternative, and innovative enough, it is also home to a radical experiment on autodidactic education called the Michael Polanyi College, or MPC as it’s known around the campus.

The MPC’s educational philosophy is incredibly aligned with Exosphere, and its new director, Zachary Caceres and I have been swapping ideas about alternative education for several years.

Instead of signing up for classes, students of the MPC design their own education and formalize it each semester in the form of a Learning Contract, where they designate what they are going to learn, who their mentors will be, and how they will be graded.

Instead of final exams and a thesis, MPC students produce a “Great Work” by the end of graduation, which could be anything from a startup to a novel, and is completely driven by their individual passions and interests.

So far four MPC students have attended Exosphere’s boot camps, and they are a joy to work with. Curious, driven, critical, and engaged, they show the true possibilities of the human spirit when we are freed to pursue what drives us from within rather than following other people’s templates.

4. Entrepreneurship is woven into everything

When I asked UFM Rector Gabriel Calzada what the university’s true specialty is, without hesitating for a moment, he said “entrepreneurship.”

Unlike most universities that have an entrepreneurship program, at UFM, the core principles and concepts of commerce and markets are woven into everything.

Entrepreneurship isn’t just a club for a few weird students, it has a place everywhere and all the time. This isn’t surprising for a university that requires first-year students to read Mises, but it is a refreshing approach compared to the staid, disconnected way most bureaucratic universities think about the subject.

One of the delights of the visit to UFM was our meeting with former Rector Giancarlo Ibarguen, who is a sort of godfather figure for students and faculty.

Giancarlo brings an engaging passion to his continued role on the Board of Trustees after stepping down as rector a couple of years ago.

During our conversation he was telling us that the university installed campus-wide wifi in 1998! This is emblematic of the institution’s forward-thinking, future-driven spirit that has led it to become the home of Heuristica, a startup incubator, the Startup Cities Institute, and host to an MIT Global Startup Workshop and TEDx.

They are also opening a center for New Media, and were streaming video content online years before YouTube.

We had a delightful time in Guatemala thanks to the hospitality and energy of the students, faculty, and administrators at UFM and can’t wait to return soon.

If you are thinking of Central America, Guatemala should be on your list.

The food is great, the opportunities are plentiful, and the people are friendly.

But be careful — the one downside of the country is ongoing problems with security due to the War on Drugs.

When that finally comes to an end, Guatemala may not be a paradise, but it will get pretty close.

Skinner Layne
Skinner Layne is an expat entrepreneur living in Chile. He is also the founder of Exosphere, a real-world bootcamp designed to teach new entrepreneurs how to succeed anywhere in the world.