Nationalism made them slaves in life… and death

The Citadel here in Hue is the central part of the city, and the basis from which the rest of the city grew. As the capital city of Vietnam’s Nguyen Dynasty from 1802-1945, Hue played an important role in politics in that era.

And the Citadel was entirely off limits to everyone but the Emperor’s family, administration, and concubines.

Just like Barack Obama’s decision to close the White House to pesky tourists, or US Senator Harry Reid’s derogatory remarks about having to “smell the tourists” in the Capitol building every summer, the Emperor of Hue’s Nguyen Dynasty needed his space.

How dare the peasants get in his way.

Of course, what’s an emperor without servants? In this case, he had plenty, all of which lived with him in the Citadel. But like other examples of government gone mad through history, the emperor demanded service in both life… and death.

Upon the death of a particular emperor, his cadre of servants didn’t join the next monarch’s court. Nor were they relieved of service to go and do something productive in the free market.

No, the Nguyen Dynasty’s servants joined him in his tomb. Their mission to a man who coasted through life thanks only to hitting the genetic Powerball would never. Ever. End.

Until they themselves died.

When the emperor’s servants finally died off, they left behind a lifelong legacy of service to the crown. Their thanks was having their bodies buried not in the Citadel alongside their master, but carted off several miles down the street to a countryside cemetery along the river.

Their above ground “tombs” were made in the shape of turtles. Thus were born the “turtle tombs” of Hue. 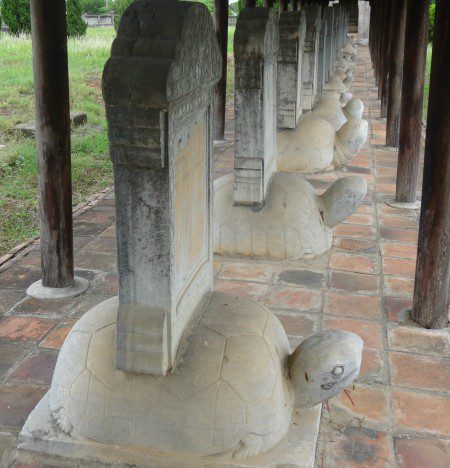 Hue, Vietnam’s turtle tombs: Where the emperor’s servants were buried after a lifetime of service to the empire, and lack of freedom

These men spent their entire lives running the service of the emperor, but were reduced to a less than dignified send off after decades of servitude, right to the bitter end.

Seeing these turtle tombs in a rather remote part of Hue – down the river from the greatness of the Citadel – reminded me that spending our entire lives fully devoted to only one master will not bring great results.

And why those who have great feelings of nationalism to their home country may well end up screwed.

Across the world, most people spend their entire lives living, working, banking, and doing all of their business in one country. Some do it out of poverty and the inability to move. Others do it out of ignorance or sense of jingoism.

Yet if you trust one emperor – or one government – to treat you well in life or death once they know you have no other options, you may be in for a rude awakening.

I wrote yesterday that I prefer small countries because they are forced to be a bit more accommodating if they want to succeed. While the US or China can rely on a large domestic market and huge pools of citizens to swindle for tax revenue, Singapore, for instance, had to do more to make itself a worldwide hub for finance and investment.

The point being, government is only as flexible as its options. Countries like the US have effectively pulled off a bait-and-switch, getting people to come there based on great economic and personal freedom, having them embrace nationalism, then slowing shutting off the freedom tap once they knew the citizenry wouldn’t fight back.

That’s why I firmly believe that anyone who relies exclusively on the United States – or any country – as the home for all of their wealth, will end up like the emperor’s servants in the turtle tombs. Your government will enslave you during life, then discard you to the outskirts of the city in death.

If the emperor’s servants would have had any options outside of the Citadel, they could have escaped when things got tough. No nation in history has lasted forever, and places like the US are no different or no better than any other failed state.

Eventually, the emperor – or empire – will die. When that happens, you’ll need assets elsewhere and a place to go, or else you’ll end up as a slave to a dead, failed empire for the rest of your life.

Step one for planting flags – as I say in my free crash course – is having an offshore bank account. Doing so gives you confidence that when the dollar and its government go to hell in a hand basket, you’ll have money sitting far from the wreckage.