The Ancient Citizenship That No One Asked For

In 212 A.D., Roman Emperor Caracalla issued a declaration named – wait for it – the Edict of Caracalla (imagine that). The Edict granted Roman citizenship to all free men within the Roman Empire. At the same time, all free women were given rights equal to those that Roman women enjoyed.

This was a sweeping change for its day. This ancient citizenship was a treasured status available only to select men. Women enjoyed limited rights, while the rest of society enjoyed little protection or national identity. Before Caracalla’s edict, only residents of Italia – most of modern-day Italy – and a few Roman Colonies held Roman citizenship status.

There was a definite pecking order with multiple “castes” below full citizenship, with various parts of the Roman Empire holding different statuses.

You might think Caracalla would be a respected leader in the Roman Empire.

But as is usually the case when the government holds out a hand, the reason for Caracalla’s action was not generosity but political calculation.

You see, Caracalla was the worst kind of tyrant. When his father died in battle one year before his famous edict, the Roman troops appointed him and his brother co-emperors. However, the two clashed and debated dividing up the empire, drawing lines in the sand the way two-year-olds divide a playroom so no one else gets to play with their toys.

If it weren’t for the Caracalla’s mother stepping in, the two would have plunged the empire into chaos.

However, Caracalla got his faction of Rome’s infamous Praetorian Guard to murder his brother Geta in his mother’s arms, then expelled anyone remotely loyal to said brother. He removed his brother’s image from all coinage, statues, and other public artwork, leaving a gaping empty space next to his own likeness from images that once featured both brothers.

He was now free to rule entirely on his own. And rule he did.

On his death bed earlier that year, Caracalla’s father told his son to take care of the military and ignore all other national affairs. And so he did.

Caracalla heaped hefty pay raises on all soldiers. It was said he had both admiration for and a deep-seated fear of the Roman military and lavished endless luxuries on them to improve his image and (out of paranoia) secure his own safety.

You can imagine that wasn’t a cheap thing to do.

Then, seeking to secure his legacy forever, Caracalla built the Baths of Caracalla in Rome. (Are you noticing a pattern of egomania here?) The baths, still a tourist attraction in Rome to this day, were the second largest the empire had ever seen.

Their main room would have dwarfed St. Peter’s Basilica and could accommodate up to 2,000 people at once.

Of course, what tyrant would be satisfied with anything less than gold-trimmed marble floors, monumental statues, and expensive mosaics? Not to mention private rooms for the Emperor and his cronies? 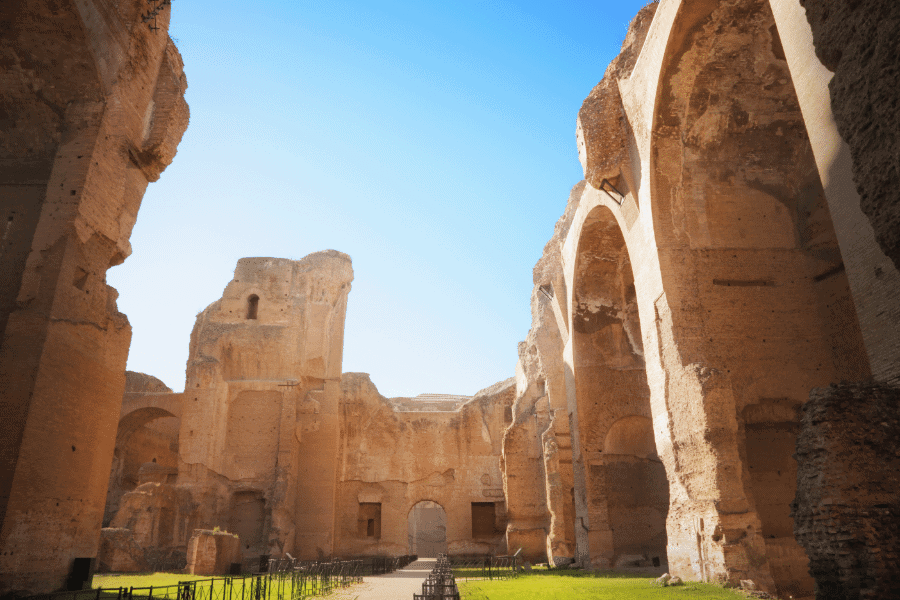 The Emperor’s lavish spending on the military and the Baths of Caracalla (pictured) landed him with a bill he didn’t want to pay… so he found someone else to pass the bill to by extending Roman citizenship to all free men in the empire.

But the piper must eventually be paid. When the bill for all his largesse came due, Caracalla first resorted to play number one from the Desperate Government Playbook: devalue the money supply. He reduced the silver purity in the denarius currency from 57% to less than 52%. To cover his tracks, he actually slightly increased the weight of the coin.

The next year, he issued a coin named after himself – of course – calling it a newly improved “double denarius”. Its silver content was no better, though. It was all smoke and mirrors.

When devaluing the currency didn’t allow him to print his way into solvency, Caracalla dreamed up a brilliant idea.

He would bestow Roman citizenship on provincial folks. Back then, things worked similarly to how they do now in that governments tend to treat tourists better than full-time citizens. As a result, those living in the far-flung areas of the Roman Empire were aliens and exempt from paying tax.

Caracalla’s seemingly outstretched hand was a farce. His lavish spending required more tax revenue. Extending the tax base by force was the only way to get it. Only, like many politicians today, Caracalla knew that it would be easier and more expedient to pretend his power grab was all about giving people more rights.

And so, suddenly, thousands of people were granted an ancient citizenship that they had never requested – rights and burdens included.

Most people believe it.

I have people who write to me and criticize my anti-tax position, saying “Taxes are the price we pay for civilization”. Oh, how civilized it is to have the government give you stuff only to return with a gun to your head and a hand in your pocket.

As my radio guest Stefan Molyneux says, politicians have used the same playbook for centuries – they just get better at the excuse-making part.

Ancient citizenship or modern, the game is all the same.

Today, Mexican and Latin American immigrants are protesting for their rights to become US citizens. With so many expats wishing they could escape the US tax nexus, I wonder why some of these people are so eager to sign up for the world’s most draconian tax laws, even ahead of a war-torn sub-Saharan state.

In reality, just as Caracalla knew the benefits of extending his ancient citizenship to the masses, modern governments know that having more people on board the sinking ship means more people signed up for a lifetime of tax servitude. Because once you’re a US citizen, there’s nowhere to hide.

At the same time, Americans and many other westerners are begging their governments to give them free health care among an ever-growing list of other things they dream up as “human rights”. You may remember a few years back when social justice advocates were suggesting that the US Treasury pay off everyone’s mortgage rather than bailing out the banks.

You know, because just not spending the money wasn’t an option.

And now, we’re all going to pay for it. Almost two thousand years later, the tricks are the same. Same tyrants, just new faces and an updated sales pitch.

This is just one reason you need a second citizenship. Your government doesn’t care about you or your needs, and there may come a time when you need an easy escape.

You don’t think some sociopathic ruler actually wants you to have more freedom to challenge him, do you?